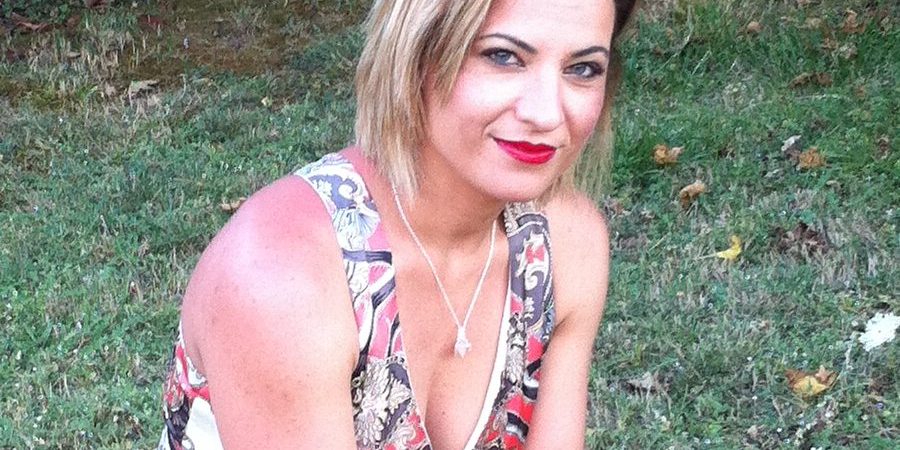 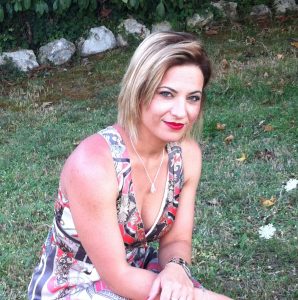 After her story appeared via Featureworld in The Sun newspaper, I was delighted to find Simona Marcoccia another deal and her story recently went over two pages of Take a Break mag!

Simona had this to say about the service from Featureworld: “I just want let you know that I am so pleased about “take a break” article.It’s nice edit, I like the picture and the story it’s just fantastic (dramatically fantastic). So so happy.”

Boyfriend Chris added: “Dear Alison, I just wanted to say that I was really impressed with the take a break article, they told the story really well and it was closer to the twists and turns from the original transcript. Thanks very much for taking this story on. I don’t think Simona can believe it actually happened. I also think that is formed a little bit of closure and karma to the situation.”

Sell your story to more publications! Because Featureworld is a free and independent media and press agent, selling your story through me means more publicity and deals for you!

Simona Marcoccia was stalked by her boyfriend’s jealous ex…

Clicking onto Facebook I scanned down my news feed.

I had a new message, Maybe it was David, my new boyfriend. Aged 45, he was the manager of the restaurant. Yes I’d read somewhere you should never mix work and pleasure but I made an exception to him…

Only the message was from someone called Emma.

‘David’s awful. I want to warn you about him,’ it said.

My stomach turned. Who was Emma. That night when I saw David I asked him.

“Oh she’s just an old girlfriend,” he said, “Yeah I think she was pretty angry when we split. Just ignore it.”

But soon I began receiving more messages from Emma.

Shockingly they were threatening and full of obscene swearwords. One said, ‘He’s just using you…. He always goes back to that bitch. Maybe he hasn’t told you about her. What a shame!!!” 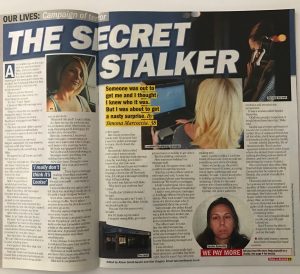 Simona in Take a Break mag

“Another said, “Stupid, stupid girl. Do you think he will stay with you??? Never.’

David was as horrified as me.

“I never imagined she’d be as bitter as this,” he said. But he agreed anyway to call her and tell her to stop.

“She says she hasn’t sent any messages,” he said the next day when I asked again, “I believe her. She just isn’t the sort to send nasty stuff like that.”

But within months the messages become more abusive.

I tried to block Emma on Facebook. I reported her to Facebook. But she’d simply create another profile and the nasty messages would begin again.

In December 2013, three months after the first message, I’d had enough.

David agreed. “Let’s go to the Police,” he said.

The officer seemed to take it seriously. He noted down all the messages.

But a few days later he called.

“We can’t find any evidence it is this Emma sending the messages,” he said.

And instead of stopping the threats intensified.

I went on Facebook one day to see someone had written on my profile I was a drug addict and an alcoholic.

By Christmas 2013 I realised I was being followed.

David and I went to Westfield shopping centre together for a romantic dinner. But the next day I got a message from Emma detailing which shops we’d been in to and where we’d eaten.

A few days later she described what I was wearing. I’d bought a new blue coat and after wearing it out, I got a message saying, ‘Ur blue coat and bag … the way u look and the way u walk … jesus u need a good wash…’”

She sent me a link to a created dating profile. The photos were pinched from my Facebook account. “I’ve sent them to your work,” she said menacingly.

“Someone called for you the other day,” said the chef, “a woman wanted to speak with you – I didn’t catch the name.”

I felt sick. Emma seemed to know my days off – ringing when I wasn’t there.

Soon the restaurant was receiving at least two phone calls in a week complaining about my service. I knew who the woman was – it was her.

Then one day I got to work and someone showed me the latest Trip Advisor review. Two

In one a woman customer said I spilt her coffee without apologising.  ‘The lady on the bar. I wouldn’t call her a lady as she stinks of cigarettes and alcohol… extremely rude and is more interesting in men than anything else.’

“But that’s not true,” I said. I recognised the poor spelling – it was a fake review from Emma.

In the New Year she left another: ‘Bar tender Simona interested in boys only who stink of booze. Just poor service.’”

David and I complained again to the Police. But Emma seemed to cover her tracks. No sooner had I sent one message from her to trace, she’d closed the profile.

I hardly dared to go out. I’d walk the long way to David’s flat or I’d take a different bus or tube back from work – anything to stop her following me.

But I’d still get messages the next day telling me what I’d been doing.

The stress caused huge rows between David and I.

“Why don’t you go round an confront Emma!” I said.

But I was sure it was – everything was signed by Emma. Who else could it be?

I told David: “I can’t carry on like this. Emma’s got too many issues. I’m sorry I just think we should split up for a while.”

He was upset and angry. “Don’t be ridiculous,” he said, “you can’t let this person split us up.”

My mind was made up. I got another job in a clothes shop and went on holiday to Lisbon to get over it.

But the stalking continued.

Within days of getting back from holiday I got a message from Emma. ‘How was your holiday,” she taunted, “did you enjoy it?”

I became a prisoner in my own home. If I did go out I continually looked over my shoulder.

Then, just as I thought it couldn’t get worse, a police officer turned up on my doorstep.

“We need to speak with you,” he said.

Maybe they’d found out who the stalker was…

Only my relief the nightmare might be over was short lived.

Bizarrely they’d received a complaint from Emma over my threatening behaviour! Now they wanted to examine my phone and laptop.

Shaking and angry, I did as the officer said. It was a nightmare. But although I was furious I knew I’d never sent any nasty messages.

It was the breakthrough the police needed to catch the stalker.

The officer rang: “It seems the stalker had been using Emma’s name to send you messages,” he explained, “Now, she – if it is a she – is using your name to send the real innocent Emma threatening messages posing as if they are from you.”

Later that day I spoke to David.

He too had been receiving threatening messages. Shockingly police had been called to his home 42 times after different women had allegedly accused him of 142 rapes, stabbings and acid attacks.

“Obviously it’s all nonsense,” he said, “of course when the police contacted the people I supposedly attacked, they hadn’t made any allegations at all.”

The revelation made me feel better – at least I wasn’t the only person this nutter was targeting. Still we were no closer to knowing who it was…

Then in August 2015 the officer rang again. The cops had finally tracked the hoax social media pages and messages to someone called Sandra Danevska.

“Who?” I said. It turned out she was a former girlfriend David had split from over a decade ago.

I was shocked. I’d thought it was Emma, the other ex. I thought of all the times I’d looked at passersby in the street and wondered if they were my stalker.

But if I’d ever seen her I’d never have guessed.

In June 2016 at Isleworth Crown Court Danevska was found guilty of three counts of stalking involving serious alarm or distress and two counts of perverting the course of justice.

The court heard when David finished their relationship, telling Danevska he simply wanted to remain friends, she could not handle the rejection.

Obsessed with her ex lover her jealousy led her to bombard me and then David with the threatening and malicious messages.

Danevska was jailed for five years and issued with a restraining order – but it was too late for David and I.

I am now rebuilding my life. Slowly I am putting the past behind me. I have a new boyfriend and a new job.

But I will never forget the nightmare. And although Danevska is safely behind bars, I will ever get over the trauma.

Expose your stalker by selling your story to the press >>>

Category: Stories sold in 2017, Stories sold to a magazine, Take a Break storiesBy Alison Smith-SquireFebruary 23, 2017
Tags: Real-life crime stories
Share this post
Share with FacebookShare with TwitterShare with PinterestShare with LinkedInShare with WhatsApp