Mum Gemma Powell’s story about her baby Bunnie-love, who is the same age as Harper Beckham, appears in WOMAN magazine.

Sporting her fashionable little outfits, Harper Beckham is as photographed as her famous mum, Victoria. 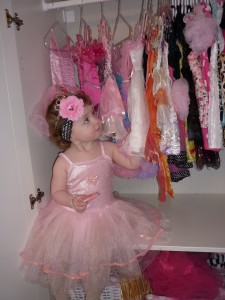 And the way Harper is presented has it seems inspired many mums to dress their own children in gorgeous clothes and ensure they always look their best.

One mum who admits she is influenced by Victoria and her little girl, is Gemma Powell. Her daughter Bunnie was born within a day of Victoria Beckham’s baby girl – and Gemma  believes Bunnie and Harper would be the best of friends if they met because they are so alike because they’d have so much in common!

For example, Gemma adores dressing Bunnie in the very latest outfits.  She often finds herself studying photos of Harper and sourcing similar clothes herself.  Many are shipped in from the States and now every night when her daughter is asleep mum goes on the internet to source photos of Harper and emulate the latest baby fashion.

At just 19 months old, Bunnie is always perfectly groomed. With her fingers always painted with nail varnish – and an assortment of over 100 hair pieces, bows – mum Gemma spends hours grooming her daughter every week. Bunnie wears a different outfit every day – sometimes mum changes her outfits twice a day.

Gemma paints her daughter’s tiny nails and toe nails – she has a matching nail varnish put on while she sleeps at night. To make Bunnie look particularly beautiful, she also wears blusher when she goes out in her pushchair. Mum knows some people might not approve but Bunnie already holds out her fingers to be painted and adores looking pretty. She also has 12 pairs of shoes, including heels. 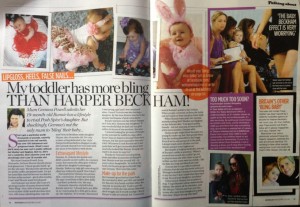 Bunnie’s bedroom is equally accessorised -it all goes into the allure that Victoria Beckham is creating for many new mums – the perfect baby girl with her own perfect room and looking beautiful with mummy.

Gemma, 31, a nursery nurse who is married, calculates she has spent around £5000 on her daughter since she was born. She spends around £300 a month on outfits for her daughter and often goes without herself so she can splash out on Bunnie.

Gemma was thrilled to see her daughter’s photo on the FRONT COVER of WOMAN magazine. And she was equally delighted when she turned to the double page spread about little Bunnie – proving you don’t have to be Harper Beckham to gain publicity!

She said: “There is a little picture of her on the front cover and she is on pages 14-15. I am delighted with the write-up!”

Gemma is so thrilled, she has now asked Featureworld if we can find her another deal!

Do you have a beautiful child who you just love to splash cash on? Let us know by filling in the form to the right of this page and who knows, your son or daughter could also star in a magazine!