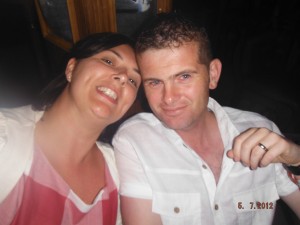 When Joanne’s husband Gary began to experience difficulty eating, neither of them thought it was anything serious.

But Gary was then diagnosed with cancer of the oesophagus and ended up having chemotherapy.

The tumour shrank and after an operation to remove it, Gary was given the all-clear. 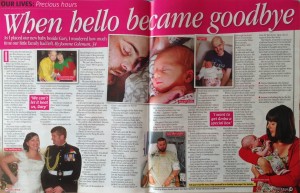 They were both thrilled but then a nightmare struck. The cancer returned and this time doctors were unable to cure it.

As Joanne’s pregnancy progressed, Gary’s condition deteriorated and in the end doctors made the decision to induce their baby. Sadly, Gary was just a dad for seven days but it was seven wonderful days as a little family and he passed away peacefully knowing he had a beautiful little girl called Amba.

Joanne made the decision to sell her story to Take a Break for charity. She is dividing the fee for her story between Help For Heroes and Macmillan Cancer Support.

Donna Sharland, who helped treat Gary is running the New York Marathon in his memory. For more information visit justgiving.com/thecancermarathon

Selling a story for charity can be a wonderful way to raise money and awareness at the same time. Contact us using the form to the right of this page with your story >>>