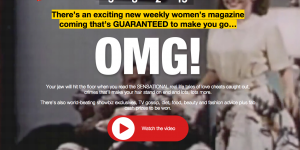 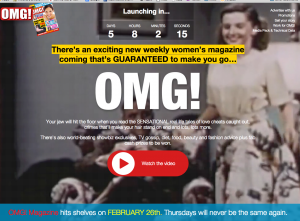 OMG! magazine. I thought it was a great name for a real-life stories magazine until I googled it and found out there appears to be other magazines worldwide with the same OMG! magazine name.

But I am not going to let a little detail of branding – and how it’s always advisable to choose a unique name for a brand-new product – get in the way of checking out this new magazine soon to be on the stands of supermarkets and newsagents.

After all, as an agent and journalist specialising in selling real-life stories to magazines, potentially having another magazine to place stories in can only be good for business.

But is OMG! magazine going to bring ‘a much-needed injection of dynamism’ to the real-life magazine market as it enthusiastically claims?

Certainly OMG! magazine has high hopes. Already in the blurb on its website, it’s positioning itself against real-life favourites Take a Break, Chat and That’s Life.

It’s an even bolder claim when you consider in the last few years – battered by the rise of real-life features in newspapers, on the internet and real-life interviewees appearing on TV – sales of magazines have fallen. Over the years there have been a few casualties – for example real-life weekly Full House closed. Meanwhile a number of magazines have quietly joined titles together, cutting back on staff.

Because of this I originally thought OMG! magazine would simply be an internet venture. But I was wrong. It is going to be a printed magazine with a launch target of 110k to 130K and set to be on sale in all the major supermarket chains and newsagents. The launch is also going to be supported by £150K worth of TV and radio advertising.

So what sort of stories can we expect in OMG! magazine? I did initially think its USP might treading a different path from the traditional real-life magazines. For example every so often someone comes to sell a story through Featureworld – I think they have a great story but despite all my efforts it fails to get placed.

Then I’ve found myself telling that disappointed interviewee: ‘If I were running a magazine I would definitely put your story in it.’ And I genuinely believe that some cracking stories fail to sell and get the publicity they deserve.

But again it appears I am wrong about this too. OMG! magazine appears to be going head-to-head with the traditional real-life magazines.

‘Your jaw will hit the floor when you read the SENSATIONAL real life tales of love cheats caught out, crimes that will make your hair stand on end …’ promises OMG! magazine, adding readers can also expect ‘world-beating exclusives.’

The only slight problem here, in my view, could be it is these sorts of stories which as an agent selling stories every day, I find all magazines (not to mention the national press and TV) also want. They are the sort of very sought-after stories which end up going for auction amongst many publications – some of whom can afford to bid thousands.

Is OMG! magazine going to be able to compete with the likes of huge national newspapers, national television and of course those traditional magazines for these sorts of stories – week in, week out – to ensure it keeps the loyalty of demanding and picky readers?

Not to mention that many of these sorts of real-life stories require a robust legal department to ensure the publication isn’t sued out of business.

ACH Publishing Ltd – made up of journalists Nick Appleyard, Paul Carter and Mark Harris – professionals who point out they have 60 years of industry experience between them and have a Manchester office – say: ‘ACH operates outside the London media bubble to offer flexibility without pre-conceived ideas about budget-stretching resourcing. Innovation and a willingness to put the reader and advertising clients first are the keys to our strategy.’

I am not quite sure what that corporate-sounding statement means. But while its unusual to lump readers and advertisers together (I think most readers would prefer no adverts and most advertisers would want to control the editorial content), what it appears to say is they believe they can cut budgets and still produce a great magazine.

I do hope that turns out to be the case because it would be great to have another magazine to sell real life stories to. And I wish OMG! magazine the very best of luck.

OMG! magazine launches on 26th February and is set to be in the shops every Thursday.

Thinking of selling your story to a magazine? Why not contact me for free, expert advice.