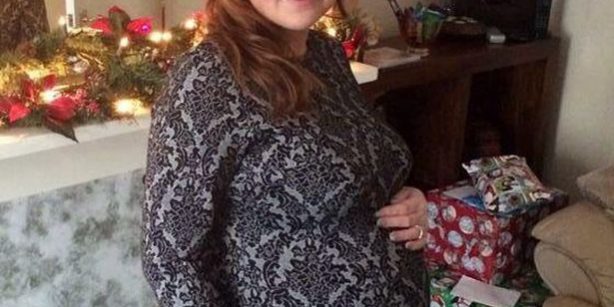 Two sets of twins! Story in the SUNDAY MIRROR… 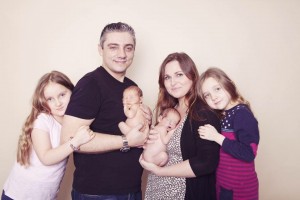 Hayley only wanted a brother or sister for her twin daughters …

Mum Hayley is believed to be a ‘double yolker’ – a woman who naturally produces two eggs rather than one every month.

Her twin daughters, seven and twin sons, now age are also believe to each be conceived a week apart. This rare phenomenon is known as superfecundation…

While most mothers would be shocked to find out they were expecting twins – Hayley, 32, has TWO non identical sets.

The odds of a couple naturally having two sets of fraternal twins consecutively are one in 700,000. But Hayley and Gavin’s twins are extra special – because it’s believed each set was conceived a week apart.

Called superfecundation, it occurs when a woman releases two eggs during the same menstrual cycle and each baby is conceived during a separate act of lovemaking.

When Hayley was pregnant with her twin daughters, a blood test revealed one twin was not as well developed as the other. She was referred to a consultant for more tests. To her relief the reason was simple – one twin was almost a week younger than the other. Doctors said it was extremely rare and although the girls were born within two minutes of one another, there was a pound difference in their weights. 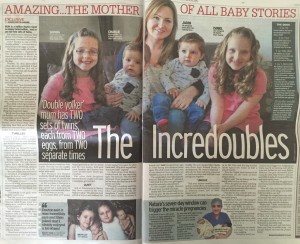 Hayley and her gorgeous family in the paper!

Doctors believe the same happened with her twin sons, again born within two minutes of one another – there is half a pound difference between them.

It is also more common to have boy and girl fraternal twins, followed by girls and then boys (which are more likely to be miscarried) so the odds of having twin girls followed by twin boys make the family even more special.

Incredibly there is no history of twins in either Hayley’s family or husband Gavin’s family. But Hayley is known as a ‘double yolkier’ – unlike most women who produce just one egg a month, she produces two. After having the girls they simply wanted one more baby.

They were particularly delighted to have twin boys to even up the family as Gavin, 37, was bracing himself to be the only guy in a family of females…!

Hayley’s daughters are also thrilled as they each have a real life baby boy doll.

Read the story in the Sunday Mirror

Hayley’s story has already been placed with a leading women’s weekly magazine!

Find out more about twins and superfecundation by going to www.tamba.org.uk

Story about two sets of twins or triplets to sell to a newspaper or magazine? Contact me for free advice >>>

Category: Sell my story to the Mirror, Stories sold in 2016, Stories sold to newspapersBy Alison Smith-SquireMarch 26, 2016
Tags: Twins triplets quads and more stories
Share this post
Share with FacebookShare with TwitterShare with PinterestShare with LinkedInShare with WhatsApp