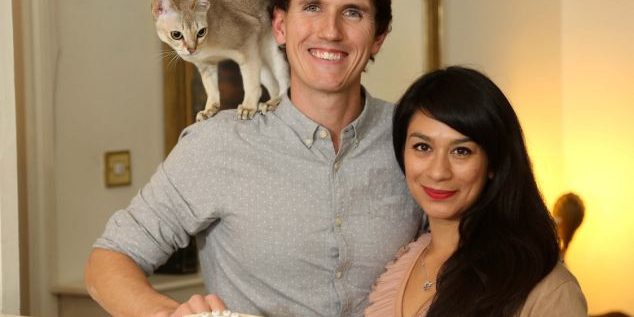 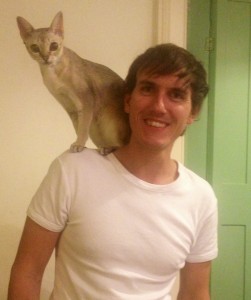 James with Bruce the kitten

James Cocksedge came to Featureworld after his kitten, Bruce, accidentally  dialled the police while he was at work…

Fearing an intruder or worse,  two burly police officers rushed to James’ flat in North London and battered down the front door.

But when they got in they discovered Bruce, a pedigree Singapura kitten was looking sheepish.

It turned out Bruce, who has developed an obsession with the landline since it was installed a few weeks ago, had dialled the police with a paw.

Owner James, 33, a TV sound recordist who lives in the flat with his fiancee, Monica said he was horrified to find his front door hanging off its hinges.

Sat outside was a policeman in a police car who told him, “Don’t worry the cat’s fine.”

He says: “When I got into the flat I saw other other cat Audrey but couldn’t find Bruce. Eventually I found him hiding in the wardrobe – I am convinced he knew he’d been a naughty kitten.” 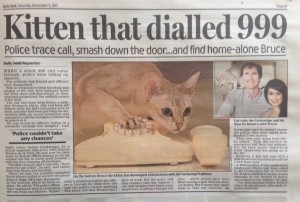 James said he can’t blame the Police, who told us a cat was referred to in the closing remarks of the record of police attendance, “For all they knew something really dangerous was going on in the flat.” However, the couple do face a bill for several hundred pounds for a new front door.

James’s quirky story appeared in the Daily Mail and gave him and Monica a lovely cutting to keep about their lively and rather mischievous cat Bruce. And now their story is shortly due to appear in a magazine!

Do you have a quirky animal story to sell to a newspaper or magazine? Pet stories are always popular with editors who know readers adore them. If your pet has done something quirky or naughty – or is a little character in their own right – tell us all about it. Contact us using the form to the right of this page>>>