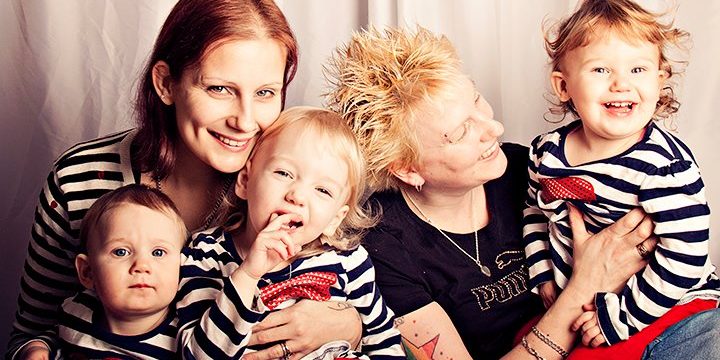 Should babies conceived by donor sperm know who their dad is? Interviewees Laura and Emma Flanagan give their views in THE SUN newspaper.

A landmark ruling at the High Court recently ruled that sperm donor dads should have the right to play a part in their children’s lives. 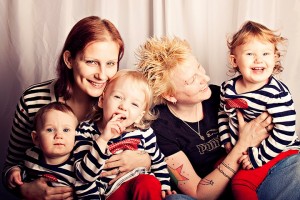 Married couple Laura and Emma Flanagan have three children between them and they are currently expecting their fourth child – by the same donor.

But unlike some couples who go to a sperm clinic to have an anonymous donor – and wouldn’t want any involvement from him – Laura and Emma are different.

From the beginning, they decided they wanted their children to grow up knowing who their dad is.  In fact they chose not to go to clinic because they wouldn’t have met or got to know their sperm donor.

So they decided to ask a friend if he would donate sperm. He agreed and although he has signed over all rights to the children to Laura and Emma, he regularly sees the kids, who have always known he is their dad. 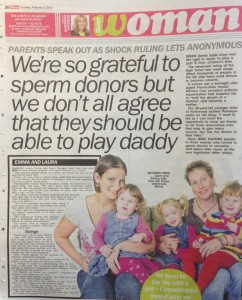 Emma and Laura were one of three couples speaking out about their different views after the High Court ruling that could affect thousands of couples who have a baby using donor sperm.

Featureworld has placed the couple’s story many times before! They first came to Featureworld in 2009 when both of them were pregnant and we placed their story over two pages in the DAILY MIRROR newspaper.  Since then their quirky story has also appeared over two pages of THAT’S LIFE magazine.

So when we were asked by THE SUN if we knew of any couples who’d had a baby via a sperm donor and who might like to contribute to their feature, we immediately thought of them!

At Featureworld when we receive requests from editors, we always go back to our past interviewees. They know they can trust us to tell stories as they want them to be and with their consent, we love to sell a story on again for them!

Have you had a baby via sperm donation? Contact us using the form to the right of this page to enquire if your story is suitable for a magazine or newspaper…