Sometimes when people come to Featureworld they are not looking to sell a story, but simply want to get their story out there. 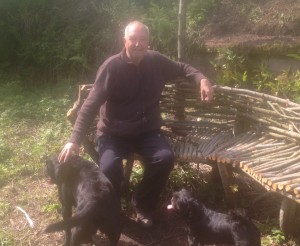 Jim Higgins, 65, was extremely upset and not sleeping at night when he contacted us about the worrying plight he found himself in.

He thought he was doing a good deed when he cleared away the brambles from a footpath running at the bottom of his garden.

His Labrador, Nell, had recently been injured by an old rusting spike from what was left of the fence and he claims when he checked with two rangers who own the land, he says they told him it was ok to go ahead.

Many villagers thanked Jim, a former police officer, who has six children and two grandchildren for his tireless work – which involved replacing the dilapidated fence, painstakingly making a seat for weary walkers from the overgrown vegetation.

Villagers were thrilled. The footpath is very busy with cyclists, walkers and horse riders  – and many thanked him that the pathway was now so much clearer. They were also grateful for his little bench. 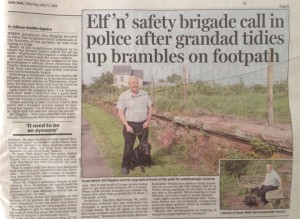 Jim in the Daily Mail

But recently, as he finished off his newly-made seat, he was horrified to be approached by a police officer. He been called by a ranger from Sustrans, the charity responsible for maintaining the land. And Jim found himself being accused by the ranger of damage to the brambles.

The ranger was also concerned about health and safety issues over Jim’s seat and whether or not it would be robust enough in the Cumbrian weather.

Worst he was accused of theft of the old fence he’d cleared away.

He has since had to go to the Police station for questioning under caution over his handiwork.

Meanwhile he says the ranger threatened to chop down his seat with a chainsaw because they are concerned it is a health and safety issue.

Villagers are horrified – many are considering getting a petition together over what they believe is the unfair persecution of Jim.

But he is worried sick that this is going to go to court and he will be convicted – after all, he admits he did cut down the brambles – and that a conviction could stop him visiting his grandson in the States.

Jim emailed Featureworld and within an hour we had placed his story with the Daily Mail newspaper – and the next morning he was photographed!

Jim, who did not want any payment for his story and was not paid, said: “I am still very worried what the outcome might be. But after Alison spoke with me and said the Daily Mail were running my story, I immediately felt relief that it would be out in the open. I had the first good night’s sleep in a week.”

Following the story in the Daily Mail, Jim was filmed for his local BBC and ITV news stations. He also spoke out on local radio and to his local newspaper.

He adds: “I have been overwhelmed with messages of support and knowing I have that support from my community has really helped me. I am still worried but am grateful to Featureworld and the Daily Mail for getting this story out there.”

Read Jim’s story and see what Sustrans had to say in the Daily Mail.

UPDATE: Following publication of Jim’s story, he was cleared and told by the Police they were no longer investigating.

Do you have a story to sell for justice? Contact us using the form to the right of this page>>