Drug mules Michaella McCollum and Melissa Reid could end up serving just a few years in prison – or even less – if the courts in Peru accept their guilty pleas. 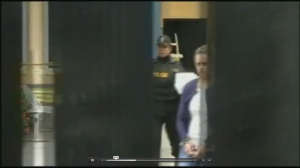 So could it be true for these girls that if so, they could return to the UK as celebrities, sell their stories for huge amounts of money and go on I’m a Celebrity?

Alas, while the fact they are certainly notorious at the moment – their faces haven’t been out of the papers since their arrest for carrying 24Ibs of cocaine hidden in food packets in their suitcases – making money from their story won’t be as simple as some believe.

This is because UK journalists are forbidden to pay anyone convicted of a crime including their families, to prevent someone from making money from crime.

This doesn’t mean the girls can’t tell their stories eventually but they would need to do so for free. And it is likely any newspaper or magazine would want to make it clear on any story that they haven’t been paid.

It doesn’t stop them becoming celebrities – appearing on chat shows, and even going on I’m a Celebrity. But whether this becomes long lasting much depends on how they come over on any TV show. If, during chats following their release, they come over as bright and likeable then of course that will be good.

But if they come over as monosyllabic or dull then their days of being famous will be limited.

Another way of making money is to write a book. Certainly, we can imagine this would be a possibility. But it would be helpful if they are actually good at writing – otherwise any book will need to be ghostwritten by a professional. And one ghostwritten book is unlikely to make enough money to be something that will set anyone up for life.

All of this assumes of course, they want to continue being ‘famous’. Having received so much press and publicity, they may just want to go home, try to put all of this behind them and quietly rebuild their lives.

For sure over the next few weeks, months or even years (depending on the sentence they receive) their story will be appearing in our newspapers, and on our TV news. There will of course be a huge flurry of publicity in the media when they do return to the UK.

But otherwise – amazing as it might seem right now – following that, both young women are most likely to fade back into obscurity.