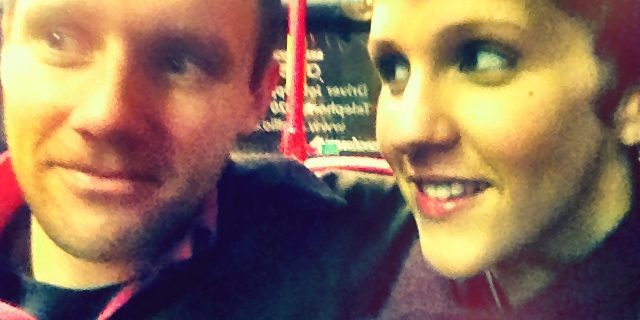 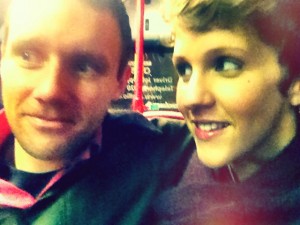 Chloe with Meldrum in happier times…

Andrew Meldrum became the first person in the UK to be convicted of cyber-stalking.

Now, one of his three victims breaks her silence to tell her chilling story…

When Chloe Turner finished with her graduate boyfriend, Andrew Meldrum, she was upset but thought nothing more.

What she didn’t realise was that Meldrum was tracking her every move – after installing a spy camera in her laptop. The pervert was watching her round the clock from the comfort of his home via the computer’s webcam without her knowledge.

Shockingly she had no idea for two months that he was peeping at her through her laptop watching her topless, in underwear and in bed until a friend said she should check her computer.

In fact it transpired Meldrum had fixed another girl’s broken computer as a favour. She had contacted police after finding her computer bugged with software enabling remote accessing of her webcam.  And the friend alerted Chloe. 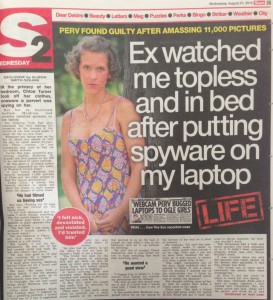 Chloe in The Sun

Chloe was horrified to find someone she had once trusted had been spying on her all of this time. She had no idea of what intimate parts of her life he’d been privee to – but she often used to have her laptop open when she got changed in her bedroom, listened to music or had friends round.

And shockingly Police found Meldrum, 30, had amassed 11,000 pictures of Chloe and his other two victims after hacking into their PCs. He had installed an app called iCam which costs as little as £2.99 and takes hundreds of photos at a time.

At his trial the judge said he was sure the peeping Tom was acting solely to feed his own ‘sexual gratification.’

At Woolwich Crown Court, he was convicted of two counts voyeurism by a jury on two women but not including Chloe and admitted three further accounts of unauthorised computer access, one of which related to Chloe. He was given a 12 month prison sentence suspended for two years, told he will be supervised for two years and must undergo 20 sessions aimed at addressing his behaviour. He was also ordered to sign the sex offender’s register for ten years, pay £2100 in costs and told he cannot use a computer unless it monitors his activities.

Chloe’s trust has been completely destroyed in men and she doesn’t know how she will be able to rebuild her life.

But she has bravely decided to tell her story in The Sun to warn other women to be wary of cyber crime – something until now she never even knew about.

On her story in The Sun Chloe said: “I was very happy with my story. Thank you so much Alison.”

Do you have a cyber crime story to sell to a newspaper, magazine or TV? Have you been stalked on the internet? If you have a story to sell, and would like to raise awareness, contact me using the form to the right of this page >>>