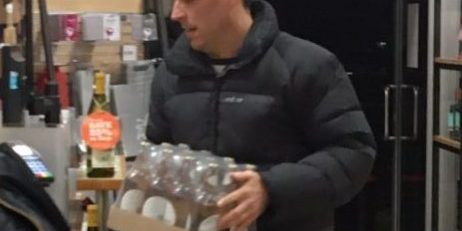 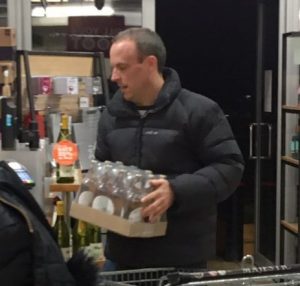 An observant shopper snapped this pic of former Brexit secretary Dominic Raab stocking up with beer at his local supermarket.

Mr Raab sent the government into meltdown when he resigned after Theresa May revealed her Brexit deal.

However, days after making sensational headlines worldwide he was spotted in his local Majestic Wine Warehouse in Esher Surrey by a fellow shopper, who took a pic.

Dressed in a black puffer jacket he was seen piling his trolley with booze including a large crate of Peroni and a 12 pack of beer. Whether he was stocking up for a party, no one knows.

“The supermarket was pretty busy,” said the fellow shopper, ‘you might have thought after all the headlines this week someone else might have spotted him or stopped to talk to him. But although he is our local MP no one else seemed to notice him there.”

The citizen reporter, who chose to remain anonymous, wasn’t sure how to sell the photo to the media – or even if it was a publishable or placeable photo.

However, I knew it was a photo that newspapers would be interested in.  Within hours of sending it to Featureworld, it was on MailOnline. The photograph has since been placed with multiple media outlets via Featureworld, gaining it further exposure.

Selling a photo is a specialist business. Photos such as this one are time-sensitive. They need to be placed as soon as possible while they are newsy! Additionally Featureworld always sends photos out with quotes or copy which makes a photo more attractive to editors. Featureworld ensures the person who took the photograph retains the copyright.

If you have a photo for the media, contact me for a free appraisal and free advice >>>

Read the story on MailOnline

Read more: How to sell a photo to the media