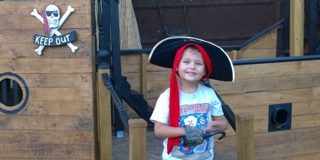 Garden pirate ship faces demolition after neighbour complains boy, four, can spy on them over the fence. 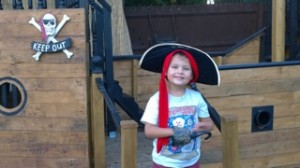 Joseph on his ship

Pirate ship was ‘labour of love’ and built from recycled wood.

Mum Paola Bailey and her husband Marcus came to Featureworld to expose what they believe are ridiculous planning rules.

When the couple built a pirate play ship in their back garden in Farnborough, Hants, for son Joseph, four, he was thrilled.

The pirate ship, which took weeks to build painstakingly using recycled wood, quickly became Joseph’s pride and joy and their handiwork admired by everyone who saw it.

But then a neighbour complained little Joseph could spy on them. The couple erected a bamboo screen to protect the neighbours to solve the privacy issues.

However, their local council has come back and said the ship is in breach of planning rules as it is too high and they need to put in full planning application as they would do for a house.

If they don’t comply then Joseph’s ship could have to be demolished.

Mum Paola, said: ‘Ironically we could have a free standing slide, higher than the ship or a huge trampoline and swing and they would be exempt from planning permission.

‘The council agrees we have addressed the privacy issue but now wants us to put in a planning permission with drawings as if we are building a house. It just seems utterly ridiculous.

‘They have said there is no guarantee we will get planning permission either and the thought of having to take down Joseph’s ship is devastating. He loves it and that will break his heart. 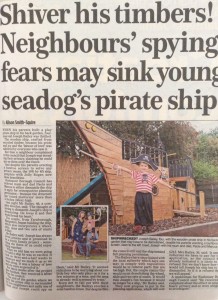 The story in the Mail On Sunday…

‘The government is always saying parents should encourage their children to play outside. We have done that and are now being penalised for it.’

Rushmoor Borough Council have suggested the family could remove the parts of the ship that are too high but Paola and Marcus feel that would ruin the ship completely. So they intend to apply for planning permission and if rejected, will appeal.

Marcus said: ‘We believe there must be better things for the council to spend their time worrying about. We also believe there should be more sensible planning laws for a playhouse in the garden which is likely to only be a temporary structure.

‘And we hope putting the story in a national newspaper will help prevent other parents going through the same as we are right now – after all, when we built Joseph’s pirate ship we never thought anyone would have a problem with it.’

You can read the full story, including what Rushmoor Borough Council had to say in the Mail on Sunday.

UPDATE: Following publication of this article I am delighted to say full planning permission was granted!

Have you had a problem with a planning application? If you have a story about a planning issue then contact me for advice about gaining publicity.