It’s no surprise that millions of us will tune in to watch the court trial of blade runner Oscar Pistorius – charged with the premeditated murder of his girlfriend Reeva Steenkamp – on TV and that this is a case set to make front page headlines throughout the world. 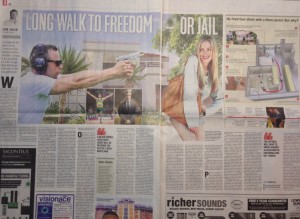 After all, the trial in Pretoria, South Africa, holds as much – if not more – fascination than the best Hollywood thriller. We already know it was Oscar Pistorius that fired four shots with a 9mm pistol killing the beautiful Reeva a few hours before Valentine’s Day. The answer is why? Was it cold-hearted murder or a tragic accident?

But makes this case even more compelling is that parts of it – the opening and closing arguments, evidence from experts and final judgement – are being televised.  And Pistorius’s testimony and that of the witnesses will be available on audio.

For me, there has never been anything more intriguing than the court room. Add to that the internet and the fact a tweet can be broadcast around he world in seconds – and you have one of the most sensational trials so far this century.

As a crime reporter in my teens and early twenties I was privileged to cover some of the biggest London courts. Day in, day out, my job was to source stories from court rooms and feed them to the national newspapers. It is a job that doesn’t really exist anymore – of course big cases are always covered by the press – but in these financially straitened times few agencies have the resources these days to pay for one journalist to sit in court every day every week just in case a good story comes along.

Yet indeed I was privileged as for me, there is nothing more interesting than sitting in court. Every facet of humanity is there – every emotion, every dark side of who we are revealed, every single real life story that can ever be imagined – it is all there in the court room.

Not to mention the legal games – a sport on which as a journalist I’d take bets with rival reporters on who would win. Which side has the best legal team – which barrister is clever enough to persuade the jury to vote a certain way – and which lawyer fails to convince anyone of his or her client’s innocence? The unfairness of justice – of those let free when we all knew they were more likely to be guilty (because not everything that might help a juror decide, such as past convictions, is revealed to jury) and of course the triumphs when a trivial case is kicked out.

All of this will be played out in high definition as the prosecution outlines its case against Oscar Pistorius – known as the ‘fastest man with no legs’  and an inspiration for millions, not to mention a hero in South Africa and beyond.

Stars of this ‘show’ are set to be defence lawyer Barry Roux – said to have a penchant for red ties – and state prosecutor Gerrie Nel. Plus 107 witnesses – even if only a small number of those actually give evidence on the stand it is likely the trial will go way beyond he three to six weeks for which is has been scheduled.

One of my strangest memories of my years as a court reporter was watching the various members of the public, many of them on a day off work or housewives with an unusual justice hobby, turn up at court to watch the drama.  The only thing missing was the popcorn (you can’t take food into a court room) but otherwise they had realised as I had – forget books, movies, the theatre – nothing is more fascinating, more intriguing and more compelling than the court room. All real life is there.

If you have a crime story to sell to the press, you can contact Alison for free advice by filling in the form to the right of this page>>>