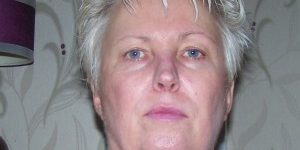 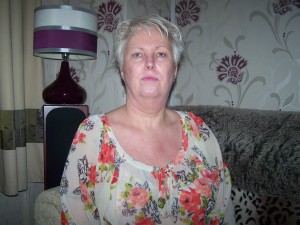 Maureen Thomas (right) came to Featureworld after suffering agonising side effects from a sterilisation operation she underwent twenty years ago. She was joined by Featureworld interviewees Anna Grant and Wendy Owen – who’d all suffered from pain following their operations.

They had all undergone a sterilisation procedure where their fallopian tubes – which carry an egg from the ovary to the uterus – were tied with clips. This stops the egg from being fertilised and a pregnancy occurring. Yet while the operations all seemed to be successful, all were suffering from a little-known condition called Post Tubal Ligation Syndrome or PTLS. The main symptom of PTLS is pain, which comes any time of the day or month. 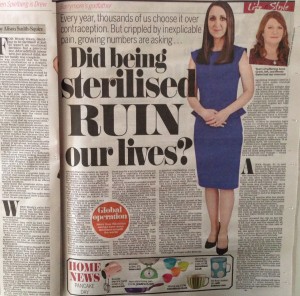 And barely anything has been written on it prior to this article which appears in the Daily Mail.

Maureen, 53, was typical of a woman with post tubal ligation syndrome. She has suffered from severe stabbing groin pain and backache. The mum to two grown up sons was constantly going to GP appointments to find out the cause. And sometimes the pain was so severe she needed to walk with a stick.

The pain was so bad that Maureen ended up taking handfuls of painkillers every day. Yet, although she was sent for various tests such as MRI scans, doctors could never find the cause.

However talking with a friend one day Maureen found herself saying that until she was in her early thirties she never had back pain. The friend asked what happened in her thirties and it was then Maureen recalled something she’d previously believed was unconnected – aged 31 she was sterilised.

She realised all her back problems had started shortly after that operation. She googled ‘pain after sterilisation’ and was amazed to discover a syndrome called post tubal ligation. And she was far from the only woman complaining about the exact pain she’d been suffering for the last 20 years.  It is recognised in the US and is talked about on many forums.

She went to see her GP who referred her to a gynaecologist. Fortunately he had heard of post tubal ligation syndrome and agreed to take the clips out. In September 2012 they were finally removed and the stabbing pains in her back miraculously disappeared.

Maureen cannot believe how much better she feels.

Having done further research Maureen is now saving up to pay £4,000 to have her tubes repaired. Right now they are still damaged and as she occasionally gets some low backache, she believes this is he cause. Maureen says research shows tubes that are not reconnected restrict blood flow and this can cause irritation and pain.

As there has been little research into post tubal ligation syndrome, the cause can only be guessed at. But one gynaecologist Featureworld spoke with believes the clips could cause inflammation or low-grade infection. Unfortunately it’s possible that this happens years after successful surgery, which is why many women and their doctors will not link the two.

All the women very much hope that this feature will raise awareness of this little known condition not only within the medical profession – many doctors are unsympathetic mostly because they’ve never heard of PTLS – but also help women who suffer from pain following a sterilisation.

Maureen says: “I am absolutely delighted that Alison and the Daily Mail took up my suggestion to do a feature on PTLS. I have suffered terribly and want doctors to take this syndrome seriously and hope other women don’t go through what I’ve done.”

My thanks to consultant gynaecologists Dr Bryan Beattie (Innermost Secrets) and Mr Clive Pickles (BMI Hospital Nottingham) for all their help with this article.

Read the article in the Daily Mail

Have you been sterilised? Perhaps you regretted it or maybe you had it carried out through choice at a very young age because you didn’t want children? We are always looking for stories about sterilisation. Contact us with your story using the form to the right of this page>>>