Pregnant and I have cancer. The doctors asked: You or your baby’s life? – I chose my unborn son… story in the Mail on Sunday 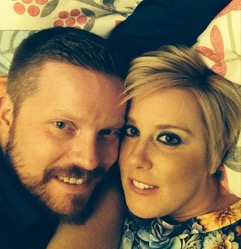 Tasha Trafford, 33, a nurse, is over five months pregnant with a longed for IVF baby. But a few weeks ago the cancer she thought she had beaten returned. Doctors have offered her a termination to save her life.

But she is determined to be a mum…

As she wed husband Jon on a private Thai beach, Tasha Trafford felt the luckiest woman alive. She and Jon began trying for a longed for baby.

But shortly a back pain she’d suffered before her wedding came back – and despite acupuncture, swimming Pilates, it got worse.

Finally a scan gave Tasha some terrible news. She had a rare type of bone cancer, Extra-skeletal Ewings Sarcoma, which was already spreading throughout her body.

Within weeks she and Jon had frozen embryos to keep alive their dream of having a child. 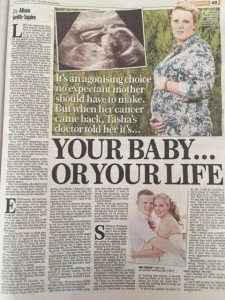 Tasha in the Mail On Sunday

And by Autumn 2014, having gone through terrible treatment which meant she lost all her hair, a scan miraculously revealed there was no active cancer in her body.

Further tests at the beginning of 2015 showed she was still in the all clear so she and Jon went ahead and had IVF.

They were overjoyed when it worked first time and Tasha even went back to work as an A & E nurse.

But devastatingly at 16 weeks pregnant she found the cancer had returned. Doctors asked her, ‘you or your baby?’ offering her a termination so they could give her the aggressive chemo and radiotherapy to save her life.

She chose to refuse chemo and radiotherapy because she is worried about any side effects to her unborn baby, a little boy. She is now 25 weeks pregnant and although doctors want to treat her she is refusing to have any until her baby is born – that won’t be until she is 32 to 34 weeks. She is happy then to have him early so she can begin aggressive treatment.

She knows that leaving it that long could kill her but she already has a mother’s instinct – and she will do anything to be a mum.

Tasha’s heartbreaking story appeared in the Mail On Sunday newspaper and will shortly be appearing in a top women’s weekly magazine.

Do you have a real-life cancer story to sell? Contact me in confidence about your story…