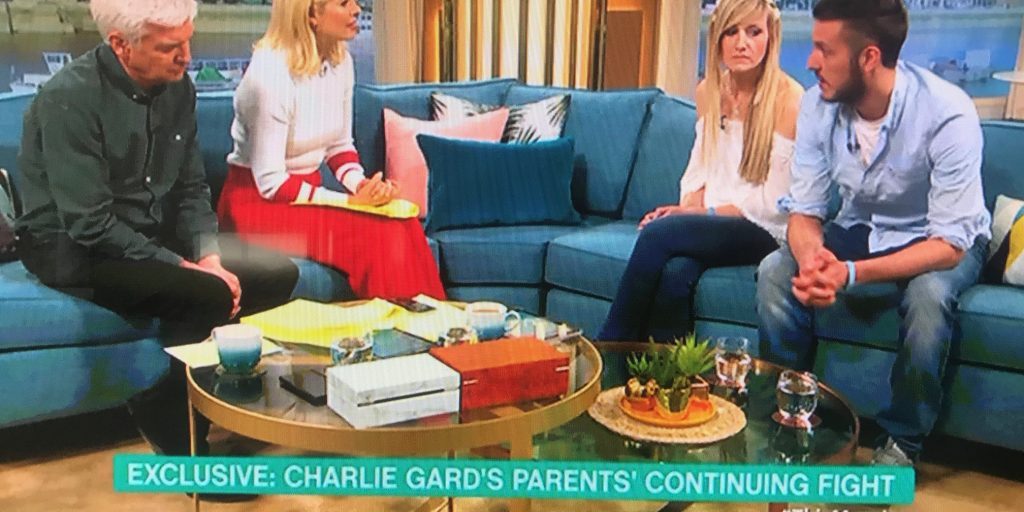 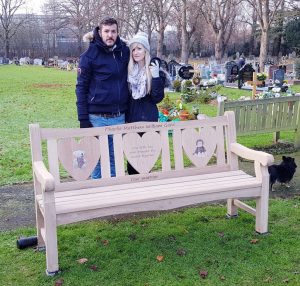 Connie Yates and Chris Gard appeared via Featureworld on the front page of the Daily Mirror – and their inspirational story also appeared over two double page spreads in the paper. 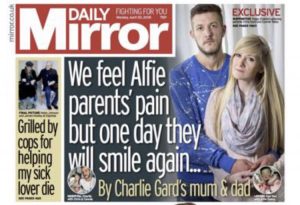 On the front page of the Mirror

The couple have been moved by the death of Alfie Evans – whose parents also lost a bitter battle through the courts to save their child – and felt the time was right to launch Charlie’s Law, which aims to give parents more involvement in life and death decisions concerning their child. It is hoped that a change in the law might prevent similar cases from going to court in future.

They also wanted to offer hope to Alfie’s parents and tell them that despite the pain they will be feeling now, they will smile again.

Following the newspaper articles the couple went on ITV This Morning, ITN News and also BBC’s Victoria Derbyshire. They told how following their son’s death they have been busy setting up their charity The Charlie Gard Foundation, which aims to fund research into Mitochondrial Disease – which Charlie had – and to help support parents when they get a devastating diagnosis.

They also spoke about how they have been coping since Charlie’s death. Chris said how he visits Charlie’s grave daily while Connie said she feels comforted because she feels Charlie’s presence with her.

And they said about how one day they hope to give Charlie a brother or sister – and the difficulties they might face as there is a 25 per cent chance any other child could be similarly affected.

The brave pair also revealed how they were trolled even on the day of their son’s death and how hurtful comments on their campaign to take Charlie to the US for pioneering treatment that could save his life, were so cruel.

As the journalist who has helped them gain press and publicity from the start, I know how much courage it took Chris and Connie to speak out again. Everything they did was to save Charlie and they were both nervous at doing more publicity now he’s gone. However, at the same time, they have decided to devote themselves to helping other parents going through the same ordeal in future. They always promised their son his death would never be in vain.

Chris and Connie will be continuing to campaign for Charlie’s Law. The Charlie Gard Foundation launched officially in June, with the couple announcing they are now engaged to be married.

Read the first part of their exclusive interview with the Daily Mirror and the second part.

Find out more about the Charlie Gard story.

Need confidential advice about doing press and publicity? Contact me using the quick form to the right of this page >>>

Category: Stories sold in 2018, Stories sold to newspapers, Television storiesBy Alison Smith-SquireMay 4, 2018
Share this post
Share with FacebookShare with TwitterShare with PinterestShare with LinkedInShare with WhatsApp