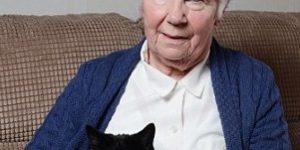 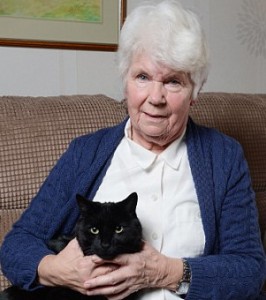 Rambo vanished from Teresa Meehan’s bungalow in February this year.

Teresa Meehan came to Featureworld because she is terrified her cat Rambo might be taken away from her… and she wanted her story to be printed in a national newspaper.

To grandmother Teresa her cat Rambo was her best friend.

So when having disappeared for four months, he suddenly arrived back at her home in Plymouth the pensioner, 75, was incredibly relieved.

Her relief however, was misplaced – because unbeknown to her, while he was away from home, Rambo had been adopted by a new owner.

Incredibly, a police constable, a Detective sergeant and even Devon and Cornwall’s crime commissioner have all been caught up in the bitter cat custody row – which Teresa has slammed as a ‘waste of time and taxpayer’s money.’

She has now sought legal advice after a police officer turned up at her bungalow with a contract with the name of Plymouth Cat Rescue at the top asking for the cat to be signed over.

Rambo, who Teresa took in as a stray kitten two years ago, first disappeared in February this year.

The widow says: ‘I was devastated. None of my children live nearby and Rambo is my world.’

Fortunately, in May and just as Teresa was cleared by a cat shelter in Plymouth, to rehome another cat,  Rambo suddenly returned.

She says: ‘It turned out Rambo had been taken in by Plymouth Cat Rescue, microchipped and renamed Butch by a new owner. But when I contacted the new owner she said I could have Rambo back as he was fighting with her other cat.’

Teresa thought that was the end of the matter.

But a week later she received a phone call from Plymouth police station claiming she was being investigated for stealing Rambo. 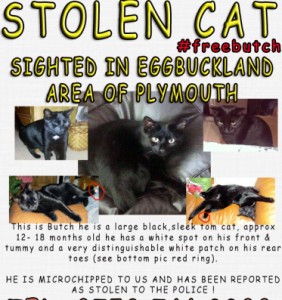 One of the posters…

Around the same time posters, which featured Plymouth Cat Rescue at the top, went up around the area with photos of Rambo on them, claiming he had been stolen and offering £100 reward for his safe return.

She says: ‘Naturally I was extremely upset as I’ve had Rambo since he was a kitten and he’s happy living with me.’

After receiving more phone calls and visits from the police she was forced to contact Tony Hogg, Devon and Cornwall’s Crime Commissioner, to complain about harassment.

She was forced to employ a lawyer to remove the posters claiming she’d stolen Rambo. She also contacted her local MP Alison Seabeck, who also investigated. Following this, the calls from Police stopped. But in October an investigation began again.

She said: ‘I also can’t believe a detective has been put on this. A few years ago my home was broken into and I had TVs and a computer stolen. But the police said they weren’t interested.’

No-one at Plymouth Cat Rescue was available for comment. But Labour MP Alison Seabeck said she is satisfied Rambo is with his rightful owner – Teresa.

Teresa and Rambo in the Daily Mail.

By the time Teresa contacted me at Featureworld about her pet custody story she was absolutely desperate to get the remaining posters removed and to stop the Police turning up on her doorstep.

She didn’t want to sell a story for money and she was not paid. She simply felt publicising the story in the national press was her last resort, her only hope of putting an end to the nightmare.

And if there is any lesson to be learned from this cat custody story – and disputes over pet ownership have become increasingly common – it must be always get your own cat microchipped as a kitten.

Do you have a quirky animal or pet story to sell to the Daily Mail, another newspaper or a magazine? If so, contact me for free advice using the form to the right of this page>>>