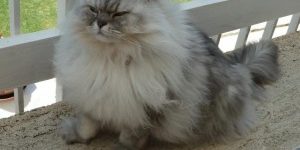 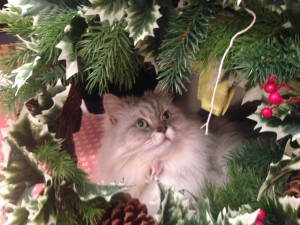 Featureworld was contacted by a member of the public who was concerned that Cats Protection charity is to be selling rescue cats from pens at animal supermarket Pets at Home.

At the centre at Pets at Home in Newbury, Berks, due to open at the end of April, the cats will be available in pens for the public to browse, who can purchase them for an ‘adoption fee’, taking them home the next day.

The member of the public was upset as she doesn’t believe Cats Protection should become involved with a pet shop and she doesn’t like the idea of cats in pens – however lovely those pens might be – in a pet supermarket. 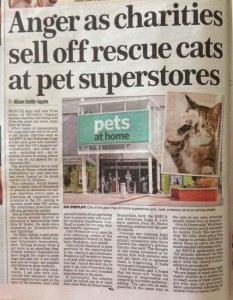 But Cats Protection is far from the only well-known charity to go into partnership with the pet shop – which floated on the stock market last week for over £1bn and plans to increase its number of stores from over 350 to 500. It also owns hundreds of veterinary practices and crucially donates thousands of pounds to the animal charities every year.

In fact the RSPCA and Battersea Dogs and Cats already run similar schemes in some stores and have rehomed dogs and cats using them. Dogs Trust is another charity in partnership as is the Blue Cross and now Cats Protection.

However opinion is divided over whether these partnerships are a good thing or not. Supporters claim as Pets at Home provide the space for free it is a cheap and also good way of raising awareness of the plight of rescue cats and dogs. The rescue cats and dogs are cared for by the charity staff, rather than the shop staff, are in a quiet place in the store and are reaching shoppers who might give one a home. They add that all placements are subject to the usual checks a charity does when rehoming a pet.

Of course it is also great PR for Pets at Home to be partnered with so many respected animal charities.

However, many feel that animal charities should not be partnering with a big retailer at all, even if it is making generous donations to them. And most of all, ironically these are the very organisations that have campaigned for years to keep dogs and cats out of pet shops. They say it might be under the guise of a ‘rescue and rehoming centre’ but as it is in Pets at Home, a shopper won’t necessarily distinguish between that and the rest of the store. The bottom line is many independent pet shops have stopped selling dogs and cats in recent years – yet now they are back in and on display at Britain’s biggest pet shop.

One vet, Mike Jessop, told Featureworld that he finds the idea of selling cats and dogs from Pets at Home ‘appalling’ and he is concerned about these animals being in pens in what is ultimately a busy supermarket.

As the feature went to press – and unfortunately it was too late to include in the piece – The Celia Hammond Animal Trust, CHAT gave Featureworld their view. This is what they had to say:

“The Celia Hammond Animal Trust is concerned about the move by some major charities to house unwanted cats in pens based inside Pets at Home Stores.

Charities including CHAT have tried for many years to ban the sale of animals in pet shops. We feel that this is a retrograde step and that animals should be adopted from charity rehoming centres.

We fear that in Pets at Home stores that animals may be purchased or adopted on a whim without careful consideration being given to the life long commitment needed to care for a pet properly.

Rescue centres all across the U.K are full to capacity and the numbers of unwanted pets are continuing to rise each year.  The majority are young animals whose owners most likely acquired them without the necessary careful thought being given to providing a home for life.

It could be argued that Charities housing unwanted and stray cats in Pets at Home stores may result in more animals being homed but CHAT is particularly concerned that it will be too easy for people to adopt or purchase a cat without a proper interview process including a home visit to discuss the pets needs and care and to ensure that owners have made a fully informed decision and can provide a responsible, permanent home. We feel that this way of rehoming animals will in fact encourage the impulse acquisition of cats.

CHAT acknowledges the support that Pets at Home is providing to Charities and would prefer to see a continuation and expansion of this involving more information being readily available to their customers about cats and dogs that are awaiting homes in local rescue centres.’

Mike Jessop adds he believes a better idea than having live rescue cats and dogs in Pets at Home would be to simply have charity information centres where people can view photos and videos of rescue cats and dogs available to adopt. They should then be directed to the usual charity rehoming centre, rather than adopting any dog or cat from the pet superstore.

However Pets at Home say they always put pets before profit and are simply trying to help rehome the thousands of rescue cats and dogs who are desperate for a home.

Certainly it is an emotive subject. You can read more and make up your own mind by going to the article in the Mail on Sunday here.

Do you have a controversial issue you would like to see debated in a national newspaper? Contact Featureworld to the right of this page to find out how we can help you >>>