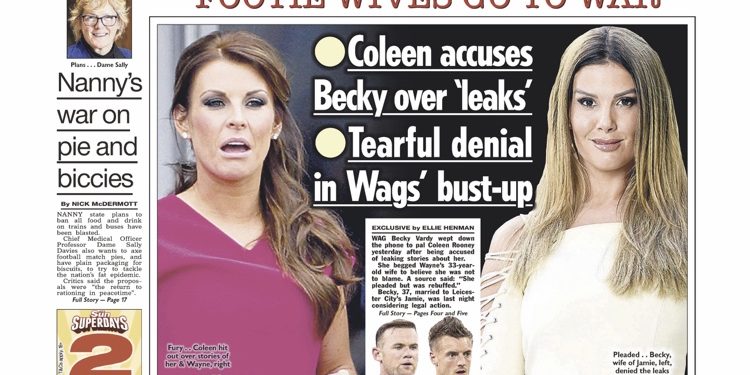 How does the media get stories? The row between footballers’ wives Coleen Rooney and Rebekah Vardy gives some insight… 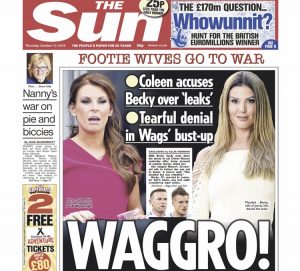 Often it is those closest to celebrities who are selling stories on them to the media…
Who can you trust if you are a celebrity? No one it seems…
Super WAG Coleen Rooney has accused her friend Rebekah Vardy of leaking stories to The Sun newspaper about her. She says she set up an elaborate sting after suspecting someone close must be sending personal stories she put on her private Instagram account to the media.

Coleen admitted she blocked all friends except Rebekah – married to footballer Jamie – from viewing posts. Then she published a series of fake stories which only Rebekah could see.

She says each of the made-up stories – how her basement was flooded, she was about to return to a TV career and how she wanted to try gender selection IVF to get a girl – were subsequently printed in The Sun (and on other media outlets which picked them up.)

Whether or not Rebekah was the person to divulge the stories to the press is up for dispute. Rebekah strongly denies the allegation, pointing out that a number of people do have access to her Instagram account. Additionally she says she doesn’t need the money from selling stories to the press.

But the spat gives an interesting insight to how such stories appear in newspapers and magazines. Suffice to say Coleen isn’t the first celebrity to discover someone close has betrayed them. Neither would Rebekah Vardy be the first person to find someone close who has access to her social media account has betrayed her trust …

Indeed when accusations of phone hacking by the media were investigated by the Leveson inquiry perhaps the most interesting facts of all were not about hacking – but the ‘friends’ of celebs who were selling stories on.

According to the Daily Mail, former Home Secretary David Blunkett believed he was a victim only to find it was a close friend who tipped off newspapers and sold his voicemails to the highest bidder.

Hollywood actor Jude Law discovered an unnamed male relative had given information on him to a newspaper.

It was also revealed actress Sienna Miller’s affair with Daniel Craig was revealed by her own driver who sold the story to a tabloid for £6,000 after seeing them together.

Incredibly some celebrities had ‘sold scandals’ on themselves. Footballer George Best’s son Callum confessed he pocketed £2000 from the now defunct News of the World for the story of his own tryst with Mick Jagger’s daughter Elizabeth. The reason? He needed publicity to remain a ‘celebrity’. In fact he’d also sold stories on about his friends.

And Prince Charles’ goddaughter was revealed as one of the News of the World’s sources on the Royal Family. Tara Palmer-Tonkinson gave the media the story about Prince William’s 21st birthday party being gatecrashed by ‘comedy terrorist’ Aaron Barshak.

It’s also worth stating that when the media gets any tips, it is legally bound to ask the person it’s about if it is true. Coleen Rooney admits when The Sun asked her for a response about their stories, she declined to comment. Had she said the stories were totally untrue then it is unlikely they would have been printed.

Read more on this issue