Should you not be terribly interested in the birth of Kate and William’s baby, then we suggest you book your holiday abroad now (although you still might not escape the hype..) 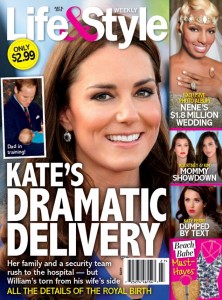 And if you are interested, then prepare for a treat. Because as soon as that royal baby boy or girl is born, the media coverage is set to be beyond anything you’ve ever seen (save the royal wedding, although we predict the baby birth may even eclipse that in terms of column inches simply because babies sell stories anyway…)

As an American magazine (see right) releases a cover page about ‘Kate’s dramatic delivery’ before she has given birth, we can reveal that behind the scenes at every national newspaper, magazine and TV station, dozens of journalists are also putting finishing touches on royal baby stories that are set to fill up every paper.

Because this is not a story you cobble together the day the birth is announced. Every publication is set to have a team that has been especially assembled to dissect every single minute detail of this child’s arrival.

Already there is speculation that the royal couple might have given a dud date – hence the baby is now thought to be due approximately two weeks early (so in early July) rather than the later July date previously given.

As a publicist I would believe this is likely to be true. First babies are notoriously late and any mum to be hates the ‘are you still there…?’ comments that come when you go overdue. A whole nation waiting with you is unthinkable. Yet most doctors usually induce most births that go two weeks over – so giving a false due date would be a good idea.

But make no mistake. All those fascinating features for you to read are already set to go. The ‘breaking news’ – the Duke and Duchess of Cambridge have had …. fill in the gaps boy/girl/weight/time … will be written, ready and waiting.  There will be pieces already written if it’s a boy, ones written if it’s a girl, discussions about the royal nursery, historical pieces, picture pieces (showing Kate’s growing bump and how her slim figure should return) and goodness knows what else all thought up by those ingenious royal baby journalism teams.

Not that those teams won’t have their work cut out once the baby arrives. As when Kate had morning sickness at the start of her pregnancy, sparking a frenzy of reporting and ‘I had the same sickness as Kate Middleton’ stories,  anything such as a caesarean, the baby’s weight (smaller or bigger than average), baby’s name, a longer stay in hospital than usual or even a casual remark by William, will ensure a longer a stream of features focusing on that particular subject. Individuals will be drafted in at short notice to craft these articles, ‘What Kate will be feeling now,’ along with the ‘I know how you feel, Kate’ articles from mums who’ve apparently been through the exact same experience.

In fact, such is the interest in anything about the royal couple, we are already warning Featureworld interviewees that if publication of their story coincides with the royal baby announcement, to expect their story to be delayed as papers and mags clear space for the royal one.

But it isn’t just writers who’ve been busy behind the scenes. Photographers too are likely to be on ‘royal baby standby’ – any pictures of Kate going to hospital and most certainly the first ones of her and glimpses of that royal baby will be highly sought after. Photos of Kate’s mum, sister Pippa, and anyone else related to the baby showing them ‘after the baby is born’ will also be in high demand.

Will it all this work be worth it? From the newspapers’ point of view, yes certainly – and why money and time will have already have been spent simply preparing the royal baby story.  While critics always pour scorn on these sorts of stories, someone IS most definitely interested as circulation of papers, mags and websites always increases sharply with royal stories. Make no mistake, this story will be of massive interest not only in the UK but worldwide throughout the States,  Europe and Australia where the royals have a huge following. Those Royal baby souvenir papers are also likely to be sell-outs as people who never usually buy a paper, clamour for keepsakes.

The only thing that could slightly scupper sales is if the royal baby does in fact arrive later in July after all when many families are starting to go away and are distracted by packing for the summer holiday. That also potentially leaves less readers in the UK to buy their souvenir copies.

That said, July and August are typically ‘dry’ periods for news. Parliament, the courts are all shut and with many people away, at Featureworld we often get editors ringing us up desperate for a story.  This year at least, for editors usually concerned about how to fill the yawning ‘silly season’ gaps, there won’t be that worry!

And incidentally if you or someone you know ends up having a baby the same day as Kate, you could sell your story. In fact anything about babies or mums, however tenuously related to the royal couple, is likely to be on the wishlist for many editors.

So you have been warned and unless you go and live in a cave, believe me, there will be little escape…