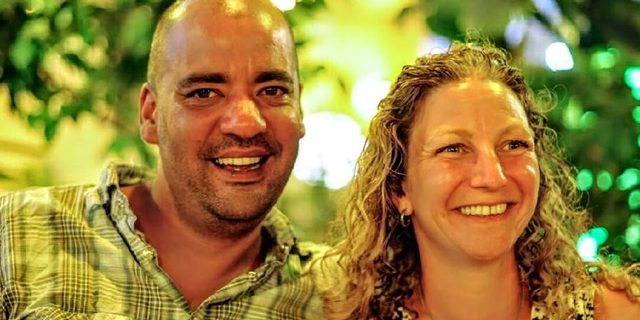 Savaged by a shark – story in REAL PEOPLE magazine

Get your story in a magazine and a newspaper! 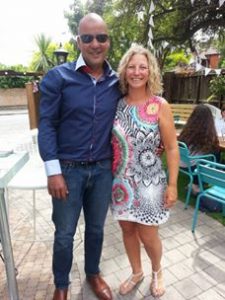 Following the publication of her story in The Daily Mail, I was delighted to gain the Gonsalves family further coverage in Real People magazine.

Indeed their extraordinary story appeared on the front page of the women’s mag and inside over two pages!

Mum Frankie, her husband Dean were snorkelling near the shore of Ascension Island, a British territory about 1000 miles off the west coast of Africa when she was savaged by a Galapagos shark.

The senior social worker said: ‘I owe my life to Dean. Were it not for his quick thinking, I would have been dragged by the shark to my death.

‘The attack came out of nowhere. One minute everything was calm. I was swimming in clear blue water off a beautiful white sandy beach, with the children paddling nearby.

‘The next I suddenly saw a huge mass of grey out of the corner of my eye. Just as I realised it was a massive shark, I felt its jaws clamp on my ankle. I managed to shout to Dean as I was being pulled deeper into the seawater, shaken from side to side. My body went into such severe shock that as the shark bit me I didn’t even feel pain.’

Her life was only saved by the bravery of her husband, 40, a company director, who risked his own life to confront the shark, punching it on the nose three times.

The couple were helped to the shore by shocked bystanders – as, attracted by the blood pouring out from Mrs Gonzales’ wound, piranha began to circle.

The couple, now back in the UK with children Katie, 11, and Louis, seven, had spent the day on another beach before moving to the idyllic English Bay for a final swim. 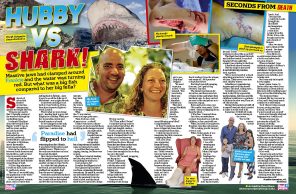 ‘Although there were signs warning about the tides there were no signs saying not to swim because of sharks,” says Mrs Gonzales, ‘so we thought it would be perfectly safe to snorkel.’

They were around 15 metres out from the water’s edge when the attack happened.

Mr Gonzales said: ‘I was snorkelling around ten metres away from Frankie when I heard a petrifying scream for me. I looked up and spotted the shark with Frankie’s leg clamped between its jaws.

‘It all happened in a terrifying but calm slow motion. I didn’t think about being attacked myself. I swam over and dived under the water. Then I punched the shark between the eyes. The shark seemed stunned because it let go of Frankie’s leg. I then shouted to Frankie to “Swim”.’

Unbeknown to his wife, the shark had bitten through several tendons and her foot was almost completely severed at the ankle.

She recalls: ‘I couldn’t swim properly as my foot felt as if it were dragging. I had no idea then how bad the injury was.

‘I was shouting for help to bystanders on the beach who had realised something was terribly wrong. At the same time I was petrified Dean would also be bitten by the shark. And I could see the children crying as I desperately tried to make for the shore.’

Meanwhile, the shark had turned round and was swimming back towards her husband.

He recalls: ‘Every fibre in my body told me to turn round and simply swim for my life.

‘But I instinctively knew that would be disastrous as I could never outswim a shark. So I turned round, treading water and frantically back pedalling so I could see where the shark was while at the same time desperately trying to get back to shore. Within minutes the shark was swimming towards me and I punched it again on its head.  I was shocked at how hard it felt. It was like hitting a metal bar with sandpaper over it.’

Once again the shark retreated. ‘But it came back a third and fourth time,’ says Mr Gonzales, ‘each time I punched it on its head and it swam off.

‘Finally after what seemed a long time, but was probably only minutes, I managed to get closer to the shore. I felt bystanders drag me out of the water. By then I was so exhausted I could barely stand.

‘I noticed a shoal of black fish. The water was full of Frankie’s blood and they were piranha. Luckily she’d been pulled out just in time.’

Fortunately one of the bystanders was a qualified first aider who used beach towels to stem the bleeding from Frankie’s leg.

By then she was in agony. She says: ‘If that first aider and two amazing men hadn’t been there undoubtedly I would have lost my foot. I will always be grateful.’

At the island’s hospital she underwent two blood transfusions and emergency surgery to save her ankle. ‘When I first saw my foot hanging off my ankle I was so shocked. The surgeons did an amazing job.’

Five days later she was flown back to the UK where at St Mary’s hospital, Paddington, she underwent further surgery to help the tendons heal.

She adds: ‘Doctors are confident I will make a full recovery although it is likely to take six months.’

‘Katie, our eldest was particularly traumatised by what happened,’ she says, ‘but I don’t intend to let what happened put me off swimming in the sea again or letting the children swim. After all to be attacked by a shark is incredibly rare.

‘Nevertheless we both feel incredibly lucky to be alive – and Dean is now known as not only my husband but my hero!’

The couple are now considering whether to tell their story on TV!

Story to tell to the media? Contact me to find out what your options are…

Category: Stories sold in 2017, Stories sold to a magazineBy Alison Smith-SquireSeptember 7, 2017
Tags: Shocking real-life
Share this post
Share with FacebookShare with TwitterShare with PinterestShare with LinkedInShare with WhatsApp