Scammed! Sue and Simon Partridge’s story about how cousin Michelle Dougherty cruelly conned them into handing over more than £100,000 life savings appears in the DAILY MAIL… 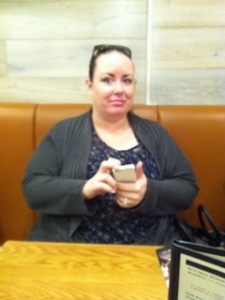 Many of us believe we could never be scammed – but what if the scammer was a member of our own family?

Susan and Simon thought they could trust their cousin Michelle Dougherty and even gave up work on promised returns, but she extracted £111K savings.

The cousin spent the whole lot on luxury cars, holidays, meals out and private education for her daughter.

The couple contacted Featureworld shortly after Michelle Dougherty pleaded guilty to fraud. They wanted to expose Michelle in a national newspaper after she ripped their family apart. I arranged for a reporter from the Daily Mail to go to the court case where Michelle was sentenced to three years in prison…

When Sue and her cousin Michelle both got pregnant at the same time, they were both delighted.

Their babies were born and the women and their respective partners began going out in a foursome. 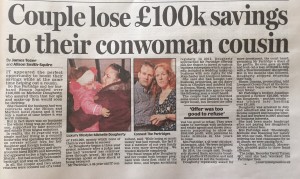 The Partridges in the Daily Mail

When Michelle,  a self-proclaimed make up artist, said she was giving up work to start her own business, Sue was very supportive.

By showing them fake accounts, Michelle convinced Sue and her husband Simon to invest thousands of pounds, much of it an inheritance from Simon’s family, into the business as sleeping partners so it could grow more. Sue and Simon had planned to buy a family home with the money but they were promised a handsome return and as she was family they trusted Michelle.

They were delighted when they saw Michelle doing so well. As well as driving in new cars such as a BMW and a Mercedes, Mishelle regularly went on luxury holidays abroad. Her daughter was even enrolled in a top private prep school. Meanwhile she boasted of how she was rubbing shoulders with footballers’s wives, going to lavish parties and even took Simon and Sue to see multi million pound houses she claimed she was buying. There they met architects, estate agents, builders who it later transpired were all conned into quoting for work on these properties.

Michelle often took the couple out for expensive dinners and days out to places such as Centre Parcs where they had VIP treatment.

Michelle continued to show the couple spreadsheets that demonstrated how Simon and Sue’s investment was doing. Incredibly the profits were shown as £51million and Sue and Simon were told Michelle was going to sell the business. Their return was going to be so great that Simon, who works in IT, even gave up work.

By now Michelle had ‘invested’ all their savings – some of which were an inheritance from Simon’s late father. Meanwhile for a final investment Simon and Sue took out a loan for £8K.

But over the next eight months as Simon waited for money, nothing was forthcoming.  When Simon tried to contact her he found he could not. Eventually he rang the arhitects and builders and found after being invited to quote, they’d heard nothing. Neither had estate agents who’d shown them round the properties. He then discovered Michelle was a bankrupt (June 2015) and was living in a fantasy world – funded by over £100K she’d scammed from them.

Ironically Michelle had been funding her lavish lifestyle with their money. Simon and Sue had no idea when they were being taken to a top restaurant and the most expensive champagne was being ordered, that in fact they were paying for it…

Michelle has now been jailed for fraud for three years.

The couple are both devastated that all their hard-earned money has gone. The scam has ripped the family apart – they used to be close to Michelle’s side of the family but haven’t spoken since she was arrested. They have also been left in debt and say their only error was trusting a member of their own family.

I have arranged for Sue to tell her story exclusively for a top women’s magazine. Needless to say with the story going into the Daily Mail the couple do feel justice has been served.

Gain justice. Ensure the press are there at a court case – contact me for free and impartial advice>>>