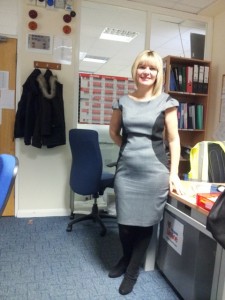 How would you deal with a lifetime of suspecting a family member was a murderer?

Since she was a teenager Kay Washford’s life has been overshadowed by the notorious Lady in the Lake murder – Featureworld arranged for Kay to tell her fascinating story over two pages of the magazine.

Kay Washford’s father Ivor Price – Carol Park’s older brother – was horrified. He had to support Carol’s parents who had no idea why or how their daughter had disappeared.

Like many, Ivor suspected Gordon had something to do with her disappearance.

However, although he was questioned by police, he wasn’t charged. In fact, he claimed she’d upped and left, divorcing her for desertion and continuing to raise their kids himself.

So the whole family had to continue seeing Gordon at events such as birthdays and Christmas, all the time wondering if he was a killer amongst them. 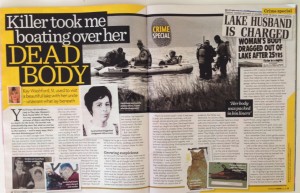 Then in August 1997 Carol Park’s body was discovered by two amateur divers in Coniston Water in the Lake District – with Police nicknaming her The Lady in the Lake. She was wearing a faded baby-doll nightie and her body was weighted down.

Dad of three Gordon Park was arrested and charged with murder but the charges were dropped in January 1998 due to lack of evidence. That wasn’t the end of the saga though – in 2004 he was sensationally re-arrested and at trial found guilty of murder.

The trial heard claims they were involved in wife-swapping parties and Gordon said Carol Park had several affairs. She’d apparently even left Gordon for someone else, although she’d later returned. And in a brutal attack Gordon had smashed her face with a climber’s ice-axe and kept her body in a freezer before disposing of it.

Chillingly over the years Gordon had even taken Carol and her sister boating over the lake where his wife lay in a watery grave.

Gordon Park went to prison. However, his family always believed he was innocent and although he was said to have admitted all to a prisoner when on remand,  Gordon never publicly confessed. His side of the family made repeated attempts for the conviction to be overturned – they said there were many other men who could have murdered Carol.

At the same time Ivor and Carol’s side of the family begged Gordon to tell them what happened to Carol’s ashes more than a decade after her funeral. Ivor, Kay and her mum Maureen had been unable to attend Carol’s funeral as Gordon only told them about it an hour before it took place.

Meanwhile the toll of years of the case dragging on led to Ivor dying a the age of 66, a broken man. Kay says: “I believe he died an early death due to the stress of it all – seeing Carol’s parents so upset – and like them, he was broken hearted, especially as we never knew where her ashes were.”

Then in 2010 Gordon Park killed himself in prison. Gordon’s family told Kay where Carol’s ashes were so she was able to pay her last respects properly.

That might have been the end of it but even after Gordon’s death Carol’s children, Jeremy and Rachael and Gordon’s third wife, Jenny,  have continued to plead his innocence.

However, Kay has no doubt Gordon was guilty: “His death was terrible as it felt as if he’d got out of serving his jail term for murdering Carol.”

The case had cast a huge shadow over Kay’s life. She says: “I will never forget the huge police investigation when Carol went missing. For years we then had to see Gordon all the time wondering if he was a murderer. Every time we have believed the nightmare had finally been put to rest, then it has reared its ugly head again- each time making national headlines worldwide. People have no idea how something like this affects the whole family.”

Do you have a crime story to sell to a newspaper, magazine or TV. If you have been victim of a crime in some way contact us for advice using the form to the right of this page>>>

Category: sell my story to woman's own, Stories sold in 2014, Stories sold to a magazineBy Alison Smith-SquireFebruary 27, 2014
Tags: Real-life crime stories
Share this post
Share with FacebookShare with TwitterShare with PinterestShare with LinkedInShare with WhatsApp