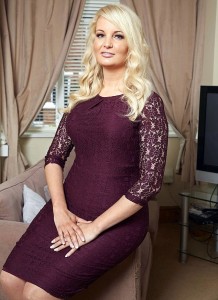 Joanne Clay came to Featureworld to get her story out about a sex discrimination case.

She thought she had landed her dream job when she was appointed sales event manager at Port Vale football club.

But within weeks of starting, she was subjected to sexual harassment by the club’s other sales manager Chris Bedding whom she claimed made crude remarks, requested she wear low cut tops  and allegedly referred to her as a ‘bitch’.

And when untrue rumours began circulating around the club that she was having an affair with the then striker Marc Richards, she was hauled into a disciplinary meeting and sacked.

Joanne was devastated as she had done nothing wrong. She had a mortgage and bills to pay plus felt her career was in tatters and her reputation in ruins.

She got some basic legal advice but could not afford to hire a lawyer but needed to clear her name. So, pitching herself against top barristers, she fought the case at a tribunal herself. 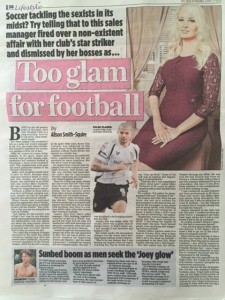 Joanne in the Mail on Sunday

It took a year – and endless nights of swotting up on employment law – for the case to get to the tribunal.  And then it took a further year for the judgement to come through. But her hard work paid off as she had won her sex discrimination case and has since been awarded an undisclosed settlement.

Since the tribunal sex discrimination case Joanne has received a number of letters of support from other women working at football clubs and has been shocked that she is far from the only woman to have experienced sexual discrimination and harassment at what is often thought of as a male industry.

However the Football Association is now looking to stamp out the practice. And Joanne hopes telling her story will go some way to helping this become a reality.

Read Joanne’s story in the Mail on Sunday

Have you been involved in a sex discrimination case? If you would like free advice about getting press on a tribunal story, contact me…