Sharon Minkin, who claims benefits equivalent to a salary of £70,000 before tax, spoke about about her plight in a TV debate. She also made the front page of the Daily Express and the Daily Mail website …

Following Featureworld’s exclusive story in THE SUN newspaper Sharon Minkin went on the sofa of ITV This Morning to speak with hosts Eamonn Holmes and Ruth Langford.

She was also joined by ex newspaper editor Neil Wallis who said he believed she should go back to work.

Former accountant and mum of three Sharon certainly held her own. She claimed she is unable to take a job because it wouldn’t pay enough to ensure she could afford her rent, essential bills and food. Already she only has approximately £200 cash a week to juggle outgoings such as gas, electricity, food, clothes and petrol – something she finds a struggle. 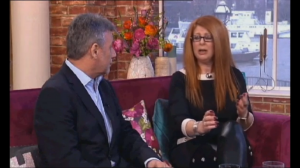 Sharon believes a parachute system where claimants work and their benefits are gradually tapered off as they earn more, should be introduced. She also believes there should be more help for parents like her who take a long career break to return to work.

At the end of the show, it was revealed 3000 viewers had sent in comments – many of which said it was the benefits system that needed to reformed to give people the incentive to get a job. 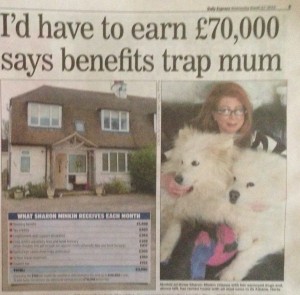 Do you have a story about the benefits system? If so, contact Featureworld using the form to the right of this page >>

Read more about getting on TV via Featureworld

Featureworld has now placed Sharon’s story with a leading women’s weekly magazine and is in talks with a UK channel for Sharon to appear in a forthcoming documentary.