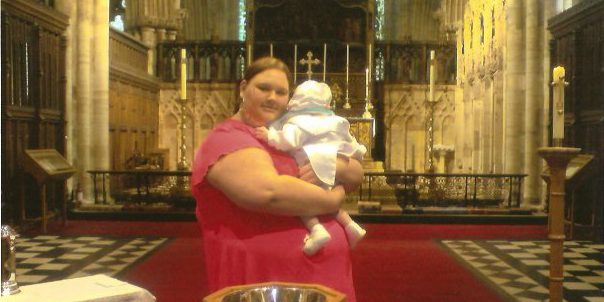 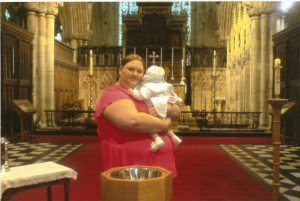 As the number of teenagers seeking obesity surgery rises, some doctors claim that weight loss surgery should be available. They claim more overweight children under the age of 18 should be offered gastric surgery because it would save money later on.

Brooke has previously appeared in Closer via Featureworld and appeared again in the magazine. Then, a year ago the overweight teenager she told Closer magazine how she knew she had to lose weight if she wanted a future.

However, although she has managed to lose a stone through healthy eating, she still struggles with her weight. Currently she weighs around 18st which is far too heavy for her 5ft 9″ height.

But she would like to be a size 14 and 10st and believes if she had a gastric band that would help her gain results faster. 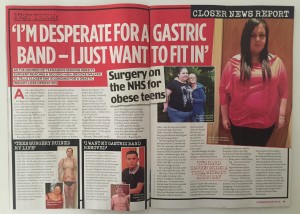 The report on childhood gastric surgery in Closer…

Currently she is bullied at school and struggles to find clothes she likes to wear. She believes she would be more popular if she was slimmer and is planning to see her GP to see if she might qualify.

However if she does go ahead – there is no minimum age for gastric surgery although it is only considered for teens in extreme circumstances – there could be serious side effects.

These include infection, internal bleeding and blood clots. Gastric bands can also slip whereas a gastric bypass is irreversible.

Malissa Jones is another Featureworld interviewee who appeared in Closer’s real life report.

Once weighing 34 stones, she had a gastric band in 2008 – but has suffered serious consequences as a result.

She felt constantly sick, and suffered with vomiting. She also developed a food phobia which led to anorexia.

In a warning to Brooke, she said surgery is not a quick fix and she now wishes she’d lost weight through healthy eating and exercise. “Surgery ruined my life,” she said, “it still hurts me to eat. I get severe cramps and have had so many infections, I’ve been told I might never be able to have a baby naturally.”

Meanwhile Emrah Mevsimler, 20, who was the youngest Brit to have a gastric band when he was 13 and weighed 16st, also suffered stomach cramps. Now 101/2 stones, he says he regrets it and is saving up to have it removed.

Are you a parent who is considering gastric surgery for your child? If so I would like to hear from you for a forthcoming article on weight loss surgery. And if you are a teenager about to undergo gastric surgery to lose weight, do get in touch >>>