Even if you don’t watch Britain’s Got Talent, you are unlikely to have missed the most talked about final of this show for years – all because viola player Natalie Holt ran across the stage and chucked an egg at Simon Cowell. 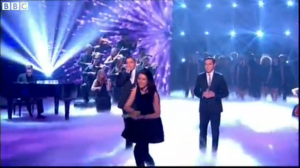 If it was a publicity stunt the timing couldn’t have been better – after all, it happened on live TV in front of more than 13 million viewers. Her aim was pretty good too as the yolk splattered down the judge’s front.

Clearly Ms Holt’s intention was to gain publicity. You don’t usually go to to a show with half a dozen eggs inside the waistband of your tights.

So certainly it was a ‘stunt’ and certainly  it was planned. She has since told how she practiced overarm bowling the day before.

Has it been successful? We would say if you want to get yourself on the front page of every national newspaper then clearly yes it has been.

Was there a risk to it? Definitely. You could argue if this had been a man throwing eggs like this, he would have been bundled out down to the nearest police station and charged with criminal damage to the suit, and assault to boot.

Luckily, for Ms Holt this didn’t happen. Instead, probably as she is a well-spoken woman and an accomplished musician with no previous that we know of for doing this sort of thing, she has got away with it. No court appearance for her – instead her deed has been reported in a rather jokey way with double page spreads of her looking wholesome and demure. Indeed, to some she might be thought of as something of a heroine.

This is because she claims she did it as a statement against the ‘dreadful influence of Simon Cowell on the music industry.’

Others have pointed out that her moment of glory was somewhat selfish as it came during a performance by Welsh singing brothers Richard and Adam Johnson, who bravely continued singing as the Ms Holt was escorted off stage by security guards.

Some have since claimed it was a pure publicity stunt – maybe even Simon Cowell was in on it himself. This cannot be ruled out. Interestingly, the Daily Mail reports more than 3million people have since watched the incident on YouTube and thanks to the royalty arrangement Simon Cowell has with YouTube, he has earned money from those views.

Of course, if Simon Cowell were not in on it, it takes some guts to go through with something like this. Ms Holt has since said she almost lost her nerve and did have second thoughts about it.

And while it appears to have worked out well for Ms Holt, it isn’t something we would recommend to any client – for the main reason that there would be a danger you could be arrested and you’d end up with a criminal record.

Also, does it paint Ms Holt in a favourable light?  There is a danger that within professional circles her behaviour could be looked down upon as simply attention seeking. Indeed, the rest of her band members are said to be distancing themselves from her, seemingly believing it to be bad publicity.

So what she does from now on will be crucial. Getting publicity is one thing – maintaining it, nurturing it, helping it to blossom into something more than one story is another.  It could be said there are other – more lasting – ways to build success.

Whether the stunt will set off fame and fortune for Ms Holt remains to be seen. Unfortunately, unless she gets this part of the publicity right, Ms Holt who took part in BGT last year with her classical quartet Raven (they didn’t get through to the semi-finals), could simply end up being remembered as ‘that woman who egged Simon Cowell’ and not, presumably, as the sparkling world-famous musician she has ambitions to be.

Is a stunt like this a good way to get publicity? Let us know your thoughts below…