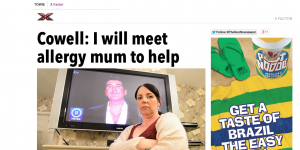 Allergy story in The Sun

Featureworld is renowned for selling whacky stories to the press. But even I had to laugh when I read about Michelle Hall – who claimed in The Sun how she is allergic to Simon Cowell. 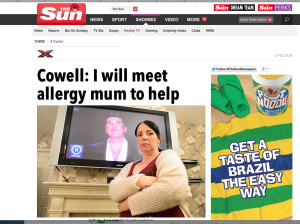 Phobia to Simon Cowell in The Sun…

Not that it is any sort of laughing matter for Michelle. The 43 year old mum of three suffers a severe reaction whenever she sees the X Factor judge. She screams, vomits and suffers sweats and heart palpitations.

Her phobia is so severe that it has cost her £20,000 in ‘cures’ over the past decade – none of which have worked.

Instead, she has ended up seeing a doctor who has prescribed the depressant Prozac for the condition.

Now, in a bizarre follow-up by Sun journalist Leigh Holmwood, Simon Cowell has offered to meet Michelle to try to help her overcome her fear of him.

She has apparently turned this down with a source saying meeting Cowell in the flesh ‘would be too difficult for her.’

Of course anyone can develop a phobia about anything and suffering from such a phobia can have terrible consequences on peoples’ lives. Common phobias for example can be agraphobia when someone becomes too frightened to leave their home or an extreme phobia of spiders which can dominate someone’s life so much they literally live in terror.

However, when people come to Featureworld to sell a story, sometimes they will mention the more unusual stories and ask why did that gain publicity when something they feel is more worthy of a mention in a newspaper does not.

The truth is that newspapers and magazines do adore whacky and unusual stories. The national press does not exist as a charity does to ‘raise awareness’ (although it often does through printing something and as journalists we all like to do that). They are also not there to lecture people – however worthy someone feels their subject is.

As well as informing a reader, national newspapers and magazines primarily want to intrigue and entertain. And rightly or wrongly a quirky story like this is often far more likely to be read by more of us than a heavier more serious political piece.

Do you suffer an unusual phobia? Contact me using the form to the right to see if your quirky story could be one for national newspaper coverage…>>>