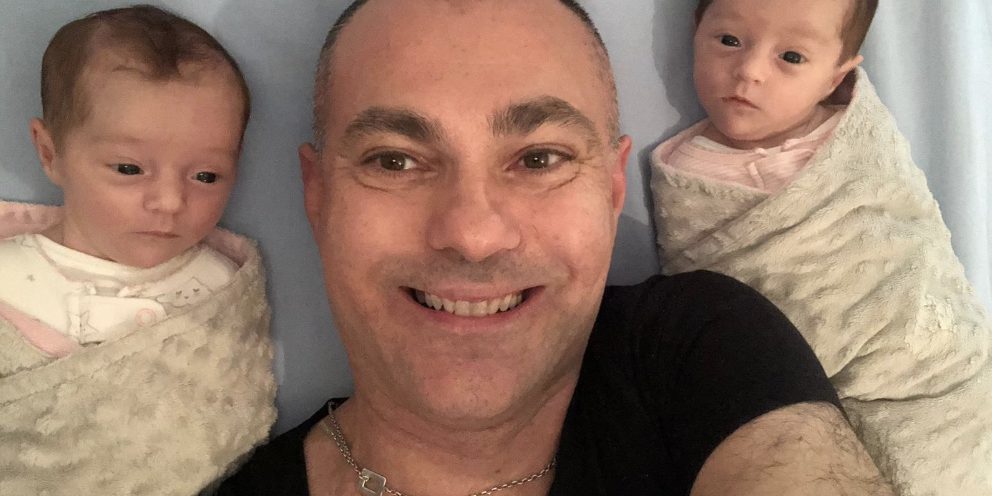 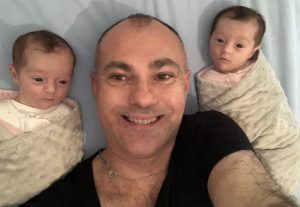 Antonio with his twin daughters

Antonio Marsocci, a single gay man who longed to be a father, contacted Featureworld because he wanted to tell his amazing story to the world!

He recently welcomed twin daughters via an egg donor and surrogate.

Antonio, 47, from sw London travelled to a clinic in Cyprus and after spending £80,000 the fashion consultancy owner’s dream of becoming a parent was finally realised.

The birth of identical twins Anna and Maria is even more amazing because 15 years ago Mr Marsocci was diagnosed with HIV and as such believed he’d never become a father.

Yet thanks to pioneering medicine, both girls – the result of one egg donated by a mum of one from Eastern Europe which was then fertilised with Mr Marsocci’s sperm and implanted into a surrogate from the Ukraine – are healthy.

Proudly cradling his two-month-old daughters, he said: ‘I can’t stop looking at them and cuddling them, they are so beautiful.

I have been through so much disappointment in my life. So to finally be a dad feels like a miracle, just a dream come true.’

His journey to become a parent began at the end of 2017 when a long term relationship broke down. He had always hoped to have a family with a partner but began to consider going it alone. 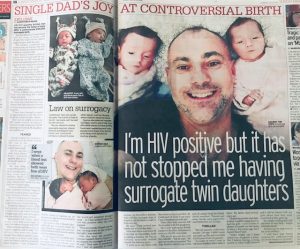 Antonio and his family in the paper

After looking into adoption, a friend mentioned a clinic in Cyprus which could help. An anonymous egg donor and surrogate had been found  – and incredibly the surrogate was pregnant within weeks.

A scan at 12 weeks then revealed the embryo had split into identical twin daughters – who were born in December 2018.

Antonio left hospital with his daughters a few days later.

Sadly his mother and brother have so far refused to speak with him, although friends and other family have been extremely supportive.

Now he doesn’t rule out having a son. “I don’t even mind when my daughters cry,” he says, “I’m just loving every minute of being a dad.”

Following publication of his story in the Mirror I placed it on Mail Online.

Antonio, who hoped to inspire others, said: “Every morning I am waking up to hundreds of positive messages from all over the world. I just wanted to say THANK YOU! I am overwhelmed and happy that my story is already achieving its goals.”

Want to tell your story in a national newspaper? To find out more just contact me >>>