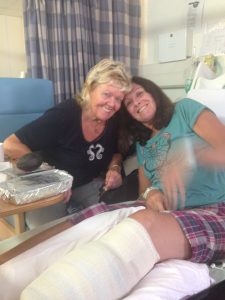 Jane (right) recovering in hospital with her mum…

Needed surgery and skin grafts to save her life and limb

A mother almost died after skinny jeans caused one of her legs to balloon to three times its normal size.

She had spent the day before squatting as she helped put up a marquee.

But later that evening the single mum of one collapsed.

Although she managed to get her jet black jeans off, her left leg began to swell.

Doctors at A and E diagnosed compartment syndrome, a painful and potentially life threatening condition caused by bleeding or swelling within an enclosed bundle of muscles – in this case the calves. 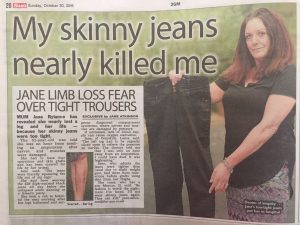 Jane in the Sun on Sunday

She was told without immediate treatment she faced her leg being amputated.

Luckily after three weeks in hospital in June where she underwent surgery including skin grafts,  she was well enough to come home but has been left with badly scarred legs.

Skinny jeans were given a health warning last year after a case was reported in the Journal of Neurology, Neurosurgery and Psychiatry where a woman had to be cut out of a pair after her calves ballooned in size.

Compartment syndrome, which is most common in the lower leg and forearm, hand, foot, thigh and upper arm, occurs when there is increased pressure in the muscle compartment which then presses on muscles,  blood vessels and nerves. If blood flow is blocked for long enough the muscles may die and the leg or arm will need to be amputated.

During emergency surgery long surgical cuts are made to release the pressure  – they are then left open to relieve pressure and are closed during a second surgery. But skin grafts are often needed to close the wound.

Doctors told Jane, who is normally perfectly healthy, the syndrome was most likely to be caused by wearing her super skinny jeans which put pressure on the calves in the muscles when she was squatting and putting up the marquee.

She came to Featureworld as she wanted to raise awareness of this little known but potentially deadly syndrome.

Jane’s story appeared in The Sun on Sunday.

Jane’s story has now been placed with a leading women’s magazine!

Story to sell to the Sun or another national newspaper or magazine? Contact me for free advice…

Category: Stories sold in 2016, Stories sold to The SunBy Alison Smith-SquireOctober 30, 2016
Tags: Health storiesShocking real-life
Share this post
Share with FacebookShare with TwitterShare with PinterestShare with LinkedInShare with WhatsApp

Hubby divorced me for spending too long on my phone!
February 12, 2017