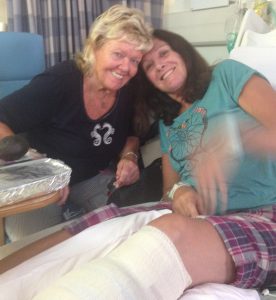 Jane, right, with her mum

Jane’s extraordinary and shocking story about how she developed a rare condition due to squeezing herself into a pair of skinny jeans first appeared via Featureworld in The Sun on Sunday newspaper.

I was delighted to secure her further coverage with one of Britain’s best loved real life magazines, Take a Break. And her story appeared on the cover as well as over one and a half pages!

Jane has since gone on to tell her story abroad!

Story to sell to a newspaper and magazine? Find out how Featureworld will gain you more deals for your story! Drop me a line using the sell your story form to the right of this page >>>

Meanwhile you can read Jane’s story below! 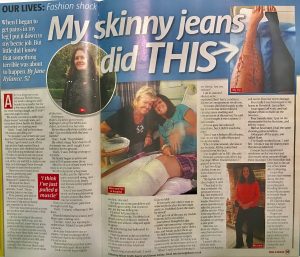 Jane in Take a Break mag!

Standing in front of the mirror I smoothed my hands down my jeans and looked at my reflection.

At 6ft tall I always had difficulty finding jeans that were long enough. But these jet black ones fitted perfectly.

They soon became my favourites.

Even when I put on a couple of pounds and they were newly washed – making them ultra tight – I still managed to squeeze myself into them.

Now I was off to a birthday party. And I knew my black jeans would be perfect as I helped put up a marquee throughout the day – and they would look great at the evening do too.

It was hard work moving tables and chairs. As I bent down to help pick up boxes and sort out the bar, I felt my jeans were even tighter than usual  – but I put it down to my imagination. After all they were super skinny jeans – that was what I loved about them.

We had a birthday buffet. My legs felt as if I had cramp in them.

As the party got into full swing I got up to dance.

But I’d only just got on the dance floor when I felt a terrible pain in my left leg.

It was so bad I collapsed onto the floor in agony.

People rushed over to help. “Oh I’m fine,” I said batting everyone away. As a carer I was never one to moan – it was a joke that at work I had to be dying before I stayed off sick.

I was helped to a bedroom in the house.  My left leg was already swelling alarmingly.

Somehow friends managed to help peel off my jeans.

I took some painkillers – but I couldn’t get to sleep.

My leg was killing me.

After a sleepless night I woke as dawn broke. Even when I was having my son Marcus, now 21, the pain was never as bad as this, I thought.

I hobbled out of bed, yanked on some tracksuit bottoms and almost collapsed again in agony.

Lying back on the bed I called a taxi. “I need to go to hospital I said.”

Somehow I got down the stairs and into the cab.

I bet all this is a waste of time, I thought, it will just be a sprain…

But by now my leg had ballooned to twice its size.

And at hospital a doctor took one look at my leg and said: “You need emergency surgery…”

He explained I had a condition known as Compartment syndrome. “It means the blood supply to the leg muscles has been reduced causing tissue swelling and compression of the nerves.

“It’s lucky you came in now. An hour later and we’d be considering amputating your leg.”

I gulped. “I just thought it was a sprain…” I said. At least that explained why it was so painful.

The syndrome usually affected people who’d been in a car crash. But in my case he thought my super tight jeans had caused it.  They’d been so tight they were literally squeezing the life out of my leg. There was simply no other explanation.

Worst was to come.

When I looked down at my leg after the operation I was horrified to see large slashes.

“My leg has been sliced open!” I cried to the nurse. It looked like something out of a horror movie.

“They had to do that to release the pressure in your leg,” she said.

Over the next three weeks I had three more operations to take the pressure off the nerves.

When the doctors said they had to carry out skin grafts to close the wounds I was devastated.

It meant being transferred to a specialist hospital (Whiston) for skin grafts. Agonisingly the skin had to be cut from my thighs and put on my left leg.

Finally I was discharged from hospital to my home in Ormskirk, Lancs.

At home I researched compartment syndrome on the internet and discovered other reports of tight jeans causing it.  Doctors even put out a warning to people not to wear such tight denim. Only a year before an Australian lady had to be cut out of her jeans after collapsing.  Luckily she got better after a few days. But her legs had also swelled and doctors put it down to her tight jeans.

Doctors said the risk was increased by squatting and bending down in super skinny jeans as it made them even tighter.

If only I’d read that before I never would have put myself at risk. I was lucky as rarely the syndrome can even prove fatal.

I just hope my experience warns others that skinny jeans can maim and kill.

My biggest sadness now is no longer wearing my skinny trousers. I really adored them. But no fashion is worth risking life and limb for.”

Sell your story? Contact me in confidence to find out how much your real life story is worth >>>

Category: Stories sold in 2017, Stories sold to a magazine, Take a Break storiesBy Alison Smith-SquireFebruary 16, 2017
Tags: Health storiesShocking real-life
Share this post
Share with FacebookShare with TwitterShare with PinterestShare with LinkedInShare with WhatsApp