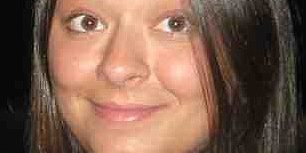 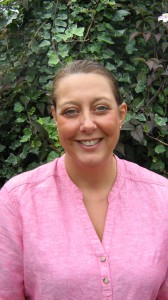 Ever looked at a photo and been alarmed that about the way you look? In this article for the Daily Mail six people told how a photo alerted them to the fact they weren’t well.

First up was Jordy Cernik. He had no idea why his face and body had ballooned – while his arms and legs were still slim. Tests later revealed he had Cushing’s Syndrome caused by his pituitary gland in his brain which was making too much of a certain hormone.  This in turn stimulated his adrenal glands in his kidneys to make too much of another hormone, which caused his puffy face. The solution was the remove the adrenal glands and within months Jordy was slim again.

Elaine Waddy suffered a puffy jaw – because she was bulimic and being constantly sick stimulates the salivary glands. The photo gave Elaine a wake up call to get help for her eating disorder.

When Naomi Whitmore noticed a strange glint in a photo of her baby son’s eye, she put it down to a trick of the light from her camera flash. But it nagged at her and when at a health check she mentioned her concerns, Harry was referred to Moorfield’s Eye Hospital. He was later diagnosed with retinoblastoma – eye cancer – but having undergone treatment is a happy and healthy boy aged six. 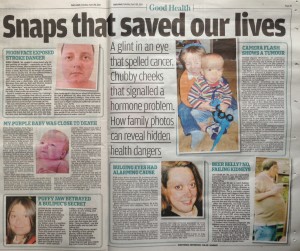 Our thanks to The Retinoblastoma Childhood Eye Cancer Trust for putting us in touch with Naomi! Find out more about eye cancer here: www.chect.org.uk

Ian Gourlay put his expanding waistline down to age – in fact it signalled kidney disease as they were swelling up. Ian has since had his kidneys removed and feels like a new person with a flat stomach.

Meanwhile Helen Rodgers was concerned her eyes were growing. It turned out she had Graves Disease, which was affecting her eyes. Years before Helen had been diagnosed with an underactive thyroid gland and then Graves Disease which cuased her to produce too much of a hormone causing the eye ball to swell. The cure was to an operation to make the eye ball socket larger and make more room for the swollen tissue. Today, her eyes are completely normal!

As with all Featureworld interviewees, we always like to give past clients the first refusal when we are researching features! Ian Gourlay’s story had already appeared in Take a Break magazine and Elaine Waddy’s story was previously featured in the Daily Mirror!

If you have a medical story for a newspaper or magazine, contact us to the right of this page…>>