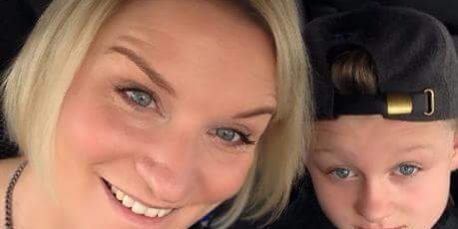 Transgender boy story in THE SUN and DAILY MAIL newspapers 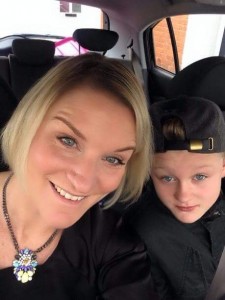 As the NHS treats soaring numbers of transgender kids under the age of ten, meet Kai …

To the casual observer Kai is a typical little boy who loves football.

But incredibly Kai was born a female.

And he is one of a growing number of transgender children being treated on the NHS.

Mum Rachel Windsor, 37, wasn’t shocked when her daughter told her she wanted to become a boy. From the age of 2, Kai related more to boys. By the age of 4 he was refusing to wear girl’s clothes. 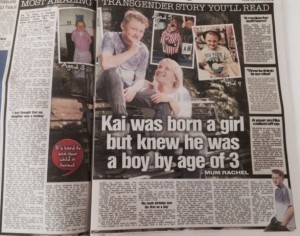 Kai and Rachel in the Sun

When he started school Rachel had to ensure he could wear trousers. But she never thought much of it – believing Kai was simply a tomboy.

However, when Kai became aggressive and his school work began slipping, his school suggested counselling.

At first Rachel wasn’t happy about it but when she met the counsellor she was impressive by how lovely he was.

By then Rachel had seen a story about another transgender child and wondered if Kai could be the same.

She was terribly worried.

Within weeks of having the counselling,  Kai was much happier but then one day he said he had something to tell his mum.

He was nine years old when he said to her he believed he is really a boy. It wasn’t a surprise to Rachel.

Even Kai’s older sister wasn’t surprised. From then on Kai began living as a boy and now, aged ten, he is undergoing hormone treatment to prevent puberty from starting.

This can always be reversed and Kai will wait until he is 16 to decide whether or not he wants to undergo surgery to complete his transition.

But he is much happier as a boy – and Kai’s happiness is the most important thing for his mum.

Rachel and Kai came to Featureworld to raise awareness of transgender children. Both of them wanted to tell their experience to help any other families going through something similar. 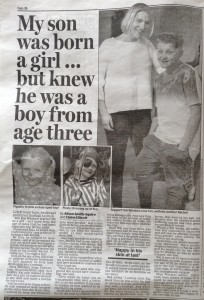 In the Daily Mail

Rachel says: ” Kai and I are delighted with the positive story in The Sun newspaper. Had I read our story when I first realised Kai might be transgender, I know it really would have helped. And we feel sure it will help any other parents and children going through the same issues.”

Following The Sun, Kai’s story was placed in the Daily Mail.

Do you have a transgender child? If you would like to tell your story in a national newspaper, magazine or on TV then do contact me >>>

Read the story in The Sun newspaper (£)

Read the story in The Daily Mail

If you need advice about a teenager or child with gender issues, go to www.mermaidsuk.org.uk