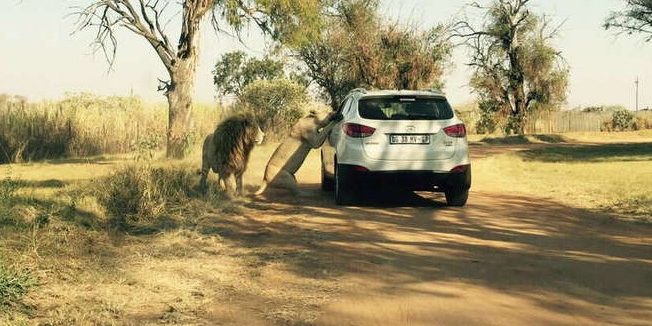 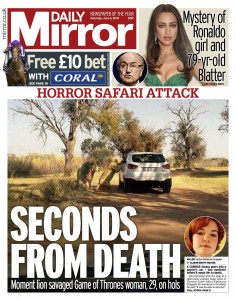 The photo made the front page…

When Ben Govender contacted me with his incredible photo of the moment before visual effects editor Katherine Chappell was mauled to death by a lion, I knew immediately it was a photo many papers would be interested in.

Ben found witnessing a scene of horror on what he thought was going to be a routine visit on a day out to South Africa’s Gauteng Safari Park.

The car he was following stopped near a pair of lions. The passenger wound down her window, presumably to get a photo of the lions.

The male and female lions appeared to be docile but then without warning the female lion lunged through the car’s open window.

It was an attack which lasted only seconds. Yet tragically it only took seconds for US tourist Katherine Chappell to sustain terrible injuries. Despite attempts by her tour guide to fight off the lion, she died at the scene.

The story appeared in the press worldwide.

Ben contacted me soon after the initial press coverage of the attack with his astonishing photo, taken from his car following behind, which shows the moment the lioness lunged.

Katherine’s family have paid tribute to her as a brilliant, kind and high spirited woman, who was in South Africa as a conservation volunteer.

When selling a topical story time is of the essence and within minutes of Ben sending me the photo I was able to contact multiple editors.

Ben was also able to give an incredible description of what happened during the attack.

His photo is already been sold all round the world.

Read the story in the Daily Mirror.

Do you have an amazing photo to sell the world’s media? If so do contact me…

Category: Sell my story to the Mirror, Sell wildlife photos, Stories sold in 2015, Stories sold to newspapersBy Alison Smith-SquireJune 6, 2015
Tags: Shocking real-life
Share this post
Share with FacebookShare with TwitterShare with PinterestShare with LinkedInShare with WhatsApp