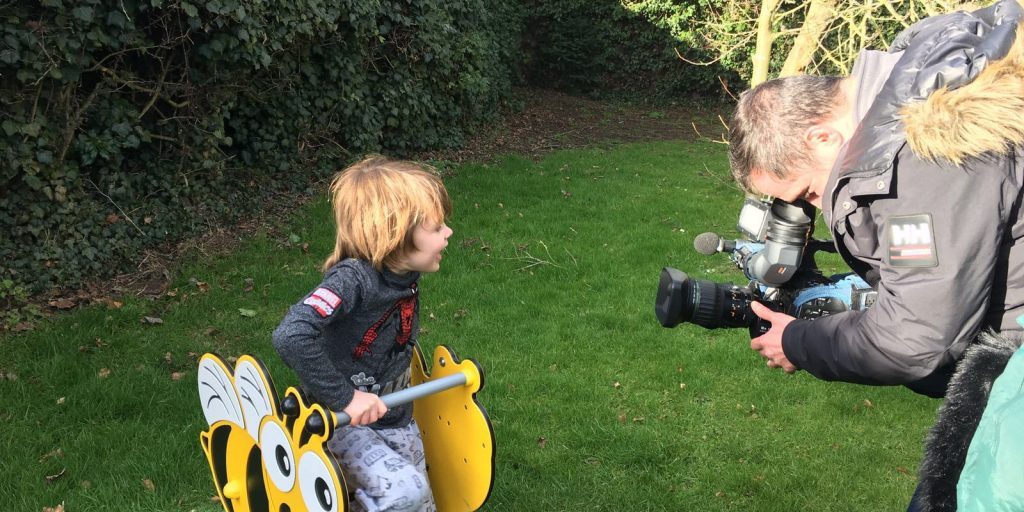 At Featureworld I specialise in getting people multiple deals for their stories! So I was delighted that Sharon’s story appeared not only once but twice in the Daily Mail and she has now appeared in Real People mag. Sharon and son Ethan even made the front cover! In addition Sharon has told her story to German TV. After doing the filming the producers at the TV station wrote to Sharon to say ‘Ethan is such a gorgeous boy! You are a true inspiration so thanks for letting us come by today!’ Sharon tells me she has had interest in her story from all over the world and I am thrilled I was able to help…! 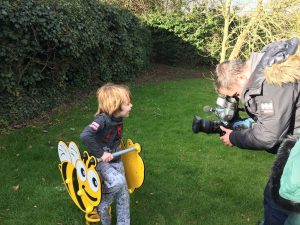 Ethan being filmed for German TV…

If you would like to tell your story in a newspaper, magazine AND go on television then do contact me for free advice. Simply fill in the form to the right of this page >>>

Meanwhile, you can read the magazine version of Sharon’s extraordinary story below…

INCY WINCY HEART ATTACK! MY boy up the spout!

Mum Sharon Broughton, 38, from Huntingdon, Cambs, tells what life is like with her real life spiderboy son Ethan, six.
Closing my eyes I gave a final almighty push. ‘It’s a boy!’ said the midwife handing me Ethan.
After two years of trying, my 7Ib 15oz baby was finally here.
‘He’s perfect,’ said my husband Richard kissing his button nose.
However within minutes there was a problem.
‘I see you tested positive as a carrier of the Step B bacteria,’ said a doctor. A patient at the care home I managed had it and we’d all been tested.
I had no idea I’d tested positive. I was terrified when the doctor explained it can transmit to a baby during labour and cause sepsis and meningitis.
‘Normally women are given antibiotics before birth,’ said the doctor,’ we’ll have to give your baby a course.’
Luckily after five days we could come home. Ethan was a beautiful baby. He’d wake up smiling and gurgling, holding out his arms to be picked up. When friends said, ‘isn’t he gorgeous!’ I felt so lucky.
At six months I returned to work.
But when I came home Ethan didn’t seem that interested in me.
Then one day I noticed he was too engrossed in spinning a toy wheel round over and over to even look up.
And, while he was crawling and taking his first steps normally, he began to make strange grunting noises.
I couldn’t shake worries there was something seriously wrong with him.
‘You worry too much,’ said Richard.
I told my health visitor at Ethan’s 12 month check.
‘Well, he seems fine to me,’ she said dismissing my worries.
Only… as the weeks went by I felt sure something was wrong. Eventually my GP agreed and sent Ethan for tests.
At 15 months my worse fears were confirmed. ‘He’s autistic,’ said the consultant.
I felt a mixture of sadness and relief. ‘At least we know the worst,’ I said to Richard.
I had no idea of the nightmare to come. 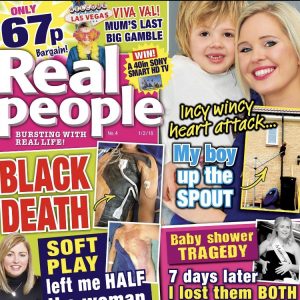 Sharon and Ethan on the cover of Real People magazine!

One day I went into Ethan’s bedroom to find him sat on top of his bedroom wardrobe.

‘How did you get up there!” I said astounded. I knew toddlers often climbed out of their cots but I’d never heard of a baby climbing his wardrobe…
But even when I called is name, Ethan didn’t respond. Instead when I tried to get him down, he lashed out angrily punching and kicking me.
From then on Ethan became obsessed with climbing.
I’d turn my back for a second and he’d be shinning up the drainpipes outside the house. I’d nip to the loo to find him swinging from a curtain pole. All my photo frames were smashed on the floor.
When we went out he didn’t walk, he ran to scale trees.
Once he misjudged a leap from a window sill and knocked his two front baby teeth out. But it didn’t put him off climbing.
I got rid of tables and chairs – but he’d use the door handles as steps and swing from the door frames.
When Ethan was almost two I gave birth to daughter Sienna.
I was so upset when like Ethan she began walking on tiptoe and waving her arms around as he did. Even the consultant said, ‘she could be austistic.’
Thankfully when she started nursery it became clear she was just copying Ethan. I cried with relief when she began making friends and talking normally.
But while Sienna was growing up a normal little girl, home life with Ethan was anything but normal.
At night Ethan slept in a special padded bed with CCTV cameras on the ceiling so we could see what he was up to. The fences in our garden were double height to stop him climbing out.
The front door was like a prison with bolts to ensure Ethan couldn’t escape.
Ethan was so good at climbing he was nicknamed Spiderboy.
Richard, a firefighter, found life hard.
Things came to a head last year when a family who looked after Ethan every Saturday so we could have some respite, said they couldn’t cope either.
It was the final straw. Richard moved out.
Covered in bruises and scars where Ethan bit and headbutted me when I tried to stop him hurting me I reached rock bottom.
This summer Ethan, who is still in nappies, was also diagnosed with sensory processing disorder. While he hears speech he doesn’t understand it – and can only say one word – Go.
Ethan’s behaviour is now controlled with a cocktail of drugs. But while they’ve stopped him being so aggressive, he still climbs.
Luckily Ethan is very loving to me, which makes up for the bad times. However I feel guilty that his demands leave me less time for Sienna.
The future terrifies me. I haven’t given up on finding a therapy that will help Ethan live a normal life.
My worst fear is his climbing could kill him. Or he’s locked up in an institution or made zombie like with drugs.
Yet while sadly we can’t visit friends and when we do go out, Ethan is strapped into a wheelchair, I will never give up on him. Whatever happens I will always be there for him.’
As told to Alison Smith-Squire
Sell your story to Real People magazine by sending me a few details. I can tell you straightaway if it is a story Real People would be interested in…
Category: sell my story to Real People, Stories sold in 2018, Stories sold to a magazineBy Alison Smith-SquireFebruary 15, 2018
Share this post
Share with FacebookShare with TwitterShare with PinterestShare with LinkedInShare with WhatsApp