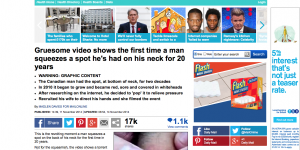 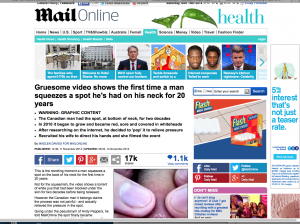 Millions of pounds are spent by companies every year, tens of thousands of press releases are emailed and an infinite amount of telephone calls made – often just to get a mention on a national newspaper website such as the Daily Mail.

Indeed it was recently revealed to pay for a sponsored article on Mail Online alone will cost you around £65,000.

So I can’t imagine how anyone who is desperate for publicity felt when they saw this video of a woman squeezing her husband’s spots trending. Not only did it amass some £1.1K comments, it was shared some 17K times. And that was just on the Daily Mail website. For this story appeared on many others such as the Daily Express.

The accompanying graphic and detailed write-up told how the Canadian man – pseudonym Andy Peppers – asked his wife to squeeze a festering zit on his neck.

And she decided to film the process – which the Mail Online write up by Madlen Davies – quoted as, “Not for the squeamish, the video shows a torrent of white pus that had been blocked under the skin for two decades before being released.”

Some of the top comments included, ‘The Day journalism died’ and ‘you know we have a problem when a man’s spot is news worthy,’ and ‘Why DM, why?’

Why indeed feature this video?

It is the sort of question interviewees coming to me at Featureworld to sell a story often ask. Understandably if you are battling cancer or fighting for justice for a loved one or – and getting little if any interest from the national press at all – it can be very hard to see a somewhat trivial story achieving so much national coverage.

But the truth is newspapers, magazines and television do not exist to print ‘worthy’ stories – although they often do publish them of course.

They are businesses which exist to attract readers – clicks to websites – and ultimately page views. This translates into currency for advertisers – the more copies a paper sells, the more readers it has, the more traffic it has coming to its website – the more that business can charge for adverts.

And the very fact that this rather bizarre story attracted so many clicks, so many comments and so many shares, means it fulfils that criteria.

To those people who made some of those comments about why a story about a wife squeezing a spot was printed, all I would ask is why did you click on the story, why did you read it – and even bother to log in and comment on it?

In fact this video does fulfil the most basic acid test of what is a newsworthy story – it is a subject that affects everyone – after all, whilst something not generally openly discussed, the vast majority of us will have had a spot and we will have squeezed it…

Read more: Allergic to Simon Cowell. Is this the craziest ever real-life story?

Wacky story to sell? Is your home-made video going viral? Contact me using the form to the right of this page to see if you have a story to sell>>>