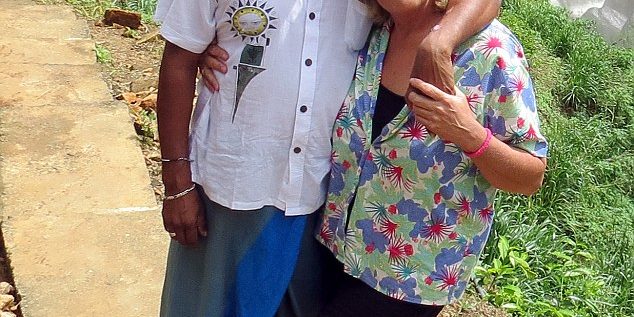 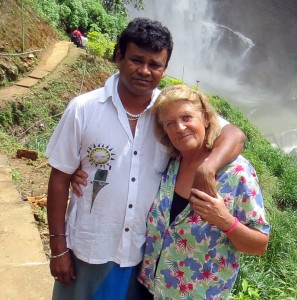 Jennifer Bain contacted Featureworld with her real life story about how she believes she’s lost thousands of pounds in a clever scam. She wanted to tell her story to warn other people  – particularly women travelling abroad – to beware.

When she fell for the charms of a Sri Lankan tour guide, she believed it was a meeting of minds.

Miss Bain, 52, wasn’t only impressed with her suitor’s impeccable manners – she was deeply moved by their shared concern of impoverished dogs in his country.

Within days of meeting Nissanka Premadasa, 43, she decided to realise her dream of opening a Sri Lankan dog sanctuary.

On returning to Cambridge, the guesthouse owner set about remortgaging her semi for the £90,000 her lover said it would cost to buy the land and begin building.

Meanwhile she says Mr Premadasa wooed her by regularly sending her photos of starving dogs she could be helping.

Fired with enthusiasm Miss Bain canvassed UK vets telling them of her plans, encouraging them to donate hundreds of pounds worth of medications to help her cause.

But Miss Bain, who had already handed over an initial £3500 in fees, claimed her dreams are in tatters and said she’d been the victim of a cruel scam.

The animal lover, who had planned to name her sanctuary Furry Tails, has discovered the land she hoped to buy does not exist. She has also found out Mr Premadasa is married with two children. 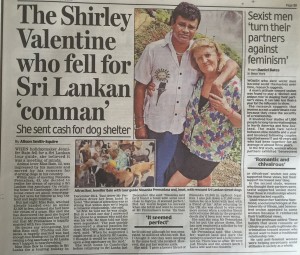 Jennifer in the Daily Mail…

He denies any wrong-doing.

But she said: ‘It is a double betrayal and I feel devastated to have been conned like this.  Finding out Nissanka is happily married was bad enough but finding out my dream of owning a dog sanctuary in Sri Lanka won’t now happen is the most heartbreaking of all.

‘To find out I won’t be helping all those poor dogs in Sri Lanka is really distressing.’

Within three days of meeting Mr Premadasa, a taxi driver, who drove her from hotel to hotel, she was smitten.

‘As well as being physically very attracted to him, I was bowled over by how polite he was,’ she says, ‘nothing was too much trouble. If I dropped something he’d pick it up, he always carried my bags and poured my tea.

‘The sense of attraction was so strong between us that within days we’d begun a romantic relationship.

‘At first he told me he was single. But in a hotel one day I answered the phone to a woman who said she was his wife. He then told me they were separated.’

The pair quickly discovered a shared passion for dogs.

‘Dogs are my children,’ says Miss Bain, who’s never married and doesn’t have a family of her own, ‘and when I mentioned how shocking it was to see so many malnourished dogs, he said it was an issue he too was passionate about.

‘He was so concerned that he would often buy food to feed the starving dogs we came across in the street.

‘And when he suggested I might invest in a hotel in Sri Lanka, I thought it would be wonderful to open a dog sanctuary on the land.’

When Miss Bain returned to Cambridge, the pair kept in touch. ‘Nissanka would send me photos of dogs he said would be helped by my dog sanctuary. We even thought up a name, planning a grand launch.’

In December 2015, and with bags of medical supplies donated by kind UK vets, Miss Bain returned to Sri Lanka, staying with a friend.

She said: ‘Nissanka said he’d found a hotel with some land close to Sigiriya.  It seemed perfect.’

But her world began to unravel when she fell ill and went to recover at Mr Premadasa’s home.  ‘By then he’d told me although he was separated, he still lived with his wife. But I thought it was odd they were still sleeping in the same bed.’

However, with her dog sanctuary dreams taking shape, Miss Bain put worries of their dwindling romance aside.

She recalls: ‘I met with a lawyer friend of Nissanka and gave him £2500 in upfront legal fees.  I also put down £1000 reservation fee on a hotel with land with a friend of his. When I got home I began remortgaging my own home to raise the rest of the cash.’

However, as she was about to wire over more money a solicitor friend noticed some details in the property deeds she’d been sent were wrong.

‘Friends had already warned me they thought I was being scammed,’ she said, ‘but when I looked at the deeds I saw it for myself. I immediately rang Nissanka to request my money back but I’d signed he put the phone down.  I hadn’t signed anything, I was then I realised I’d been duped.’

Miss Bain has now employed a solicitor to try to get the money back.

She admits: ‘I feel an idiot but as my lawyer points out, it was a very clever scam.’

She has decided to tell her story to warn others. ‘I am an intelligent woman who has travelled all over the world.

Mr Premadasa said: ‘She (Jennifer) wanted land and gave the money to a lawyer and a hotel owner, not me. There was no affair.  We were just friends and she always knew I had a wife and two children.’

Have you had a holiday nightmare? Have you been the victim of a cruel scam abroad? Contact me for advice on getting your story into the national press >>>