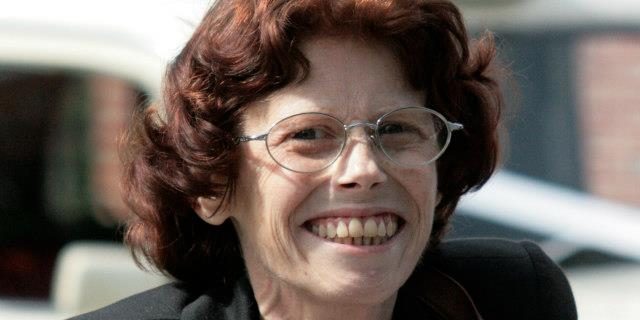 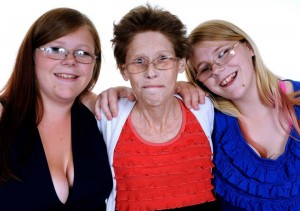 Angela with daughters Chantel and Melissa.

Daughter Chantel Graf contacted me to raise awareness of the side effects of gastric weight loss surgery after her mum had one and starved to death.

As a little girl, Chantel, 19, remembers her mum Angela, who was born with hip problems, as being overweight but happy. And although from the age of eight, she was her mum’s official carer – at over 26 stones and only 4ft 9″ she had a BMI of 78. She was so big she couldn’t do some things for herself –  her mum still adored going out to friend’s and on days out.

But of course mum Angela longed to be slim. She tried dieting but they never worked. And finally after a lifetime of being overweight, Angela was told by doctors if she didn’t have an operation she would die anyway.

She finally got the gastric bypass she’d longed for on the NHS.

She was so excited about the big day  – dreaming of shopping with Chantel and her sister for the wardrobe she’d never had. 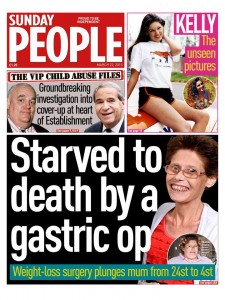 Shocking story made the front page…

But as soon as she’d had it, things took a turn for the worst. Angela couldn’t keep food down and started losing weight too fast. Doctors said it would pass but even anti-sickness tablets didn’t work.

After losing four stones in three of months, Angela went back to hospital was diagnosed with pancreatitis – inflammation of the pancreas which is a side effect of gastric surgery.

But she didn’t improve, with her weight plummeting. Surgeons tried to reverse the bypass but it didn’t work.

Tragically she went through hell, being unable to eat without being sick. Unsurprisingly Angela developed a fear of food and despite the family’s valiant attempts to tempt her to eat, just couldn’t face it. She was even given a tube into her stomach but failed to gain enough nutrients.

Her internal organs began shutting down and she was in and out of hospital as doctors battled to keep her alive.

Chantel’s dad couldn’t cope with the strain of living with Angela as she was and their marriage broke up. 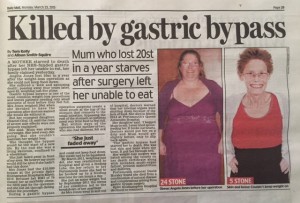 The story in the Daily Mail

Eventually in March 2014 weighing just five stones, Angela died. Her family say she literally wasted away in front of their eyes, dying a slow, agonising death.

A post mortem found she’d died from the onset of pneumonia caused by the gastric bypass. She was just 42.

Chantel, 19, was pregnant with her first baby. Sadly her mum never got to meet her baby grand-daughter, born four months later.

Chantel’s mum – whom will always be remembers as someone who was always smiling and a wonderful mum – always regretted that she had the bypass and didn’t stick to dieting and exercise. She realised soon after having the bypass losing weight the natural way would have been much better.

Chantel wanted to warn others that having gastric surgery is not the answer some people imagine it will be. She believes her mother should have been given more support to stick with a conventional diet and exercise. And she hopes this serves as a warning to anyone thinking about going this route to consider the possible side effects carefully.

Read the full story in the Sunday People newspaper.

The story has also been placed with the Daily Mail

Do you have a story about weight loss gone wrong to sell to a newspaper, magazine or TV? Contact me using the form to the right of this page to find out which publication you could sell your story to and what is involved>>>