This is how Cindy Jackson’s transgender story appeared in the Sunday Mirror newspaper.

Do you want to sell a story about a sex change? 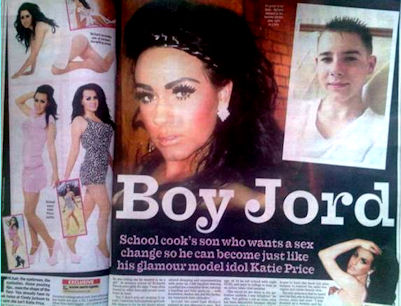 The hair, the eyebrows, the eyelashes, those pouting lips… even the shape of the face. You already have to look twice at Cindy Jackson to be sure she isn’t Katie Price.

But ‘Cindy’ isn’t what she seems. She’s an 18-year-old boy called Richard – who is desperate to have a sex-change to look even more like the former Jordan, and become a top glamour model just like her.

‘To me she is the perfect woman,’ says Richard, who has changed his name to Cindy by deed poll. ‘Not only does she have an amazing face and figure, she is strong and focused. My wall is covered in her photos and I probably have over a thousand cuttings about her. And although her boobs are now a DD, I preferred hers when they were bigger – so I plan to have EE implants.’

Richard, who lives in Leeds with his mum, Donna, 38, has been dressing in girl’s clothes since he was 12. And school cook Donna support’s his decision to change his sex. ‘I’ve always known Richard was different from other boys,’ she says.

‘Even as a three-year-old he liked to take a handbag to nursery. And he never played with boy’s toys. Instead he loved cooking on a pretend kitchen and dressing up in my high heels and make-up. And at seven he was telling me he wanted to be a girl.’ At primary school all Richard’s friends were girls. He says: ‘I was often teased by other boys and would come home in tears.

‘But it didn’t stop me wanting to be a girl. I hated my boy’s uniform and took any chance to try on my mum’s shoes or nana’s fur coats. Even then I adored wearing glamorous clothes.’

By 12 Richard had grown his hair. He says: ‘By now I was at secondary school and the teachers let me do PE with the girls. And instead of football and rugby, I played hockey and netball.’

Meanwhile, Richard, who is 5ft 8in and a Size 10, would come home from school and change into girl’s clothes. He recalls: ‘I shaved my body hair and adored shopping and experimenting with make-up. I felt happiest wearing a padded bra, a beautiful dress, carrying a handbag and fully made-up – with foundation, blusher and, just like Jordan, my trademark false eyelashes.’

Around the same time Richard realised he was attracted to men. ‘But I knew I wasn’t gay,’ he says. ‘I only went for straight guys. Even now I have yet to have full sex. A few months ago, while dressed as a woman, I met a man who was totally heterosexual. But neither of us wanted a gay relationship so we parted. Now I would only want to experience sex as a woman.’

Richard was just 15 when he first saw his GP to ask about a sex change, but was turned down because of his age. At 16 he left school with eight GCSEs and went to college to train as an airline cabin crew member ‘The tutors let me dress in the airhostess uniform. I was delighted,’ he says. ‘But getting a job as cabin crew has been impossible because official documents state I am a man and then Cindy turns up for an interview.’ He now plans to be a beauty therapist.

In September last year, Richard was referred to the NHS Gender Reassignment Clinic at Seacroft Hospital in Leeds. In the next three months he will begin taking female hormones.

‘I already have A-cup breasts and hips,’ he says. ‘The hormones will develop my breasts more, get rid of body hair and soften my facial skin.’ He then hopes to have the boob job plus surgery to remove his male sex organs and create female ones.

His only sadness is that he hasn’t seen his dad, who is divorced from Donna, since last year. ‘I was dressed as a woman and he barely spoke to me.

‘He has never accepted I want to change my sex. The fact I look like Jordan has made our rift even worse, as for some reason he doesn’t like her.’

But that won’t stop his plans to become a glamour model.

He says: ‘Jordan is amazing, but I think I can do a better job than any woman.’

Category: Recent Stories 2010, Sell my story to the Mirror, Stories sold to newspapersBy Alison Smith-SquireDecember 23, 2012
Tags: Transgender real-life stories
Share this post
Share with FacebookShare with TwitterShare with PinterestShare with LinkedInShare with WhatsApp