This is how Joanna’s gastric band story appeared in the Daily Mirror.

EXCLUSIVE: It seemed like the miracle cure for her obesity, but after Joanna McDermott had weight-loss surgery all she could eat was melted chocolate. 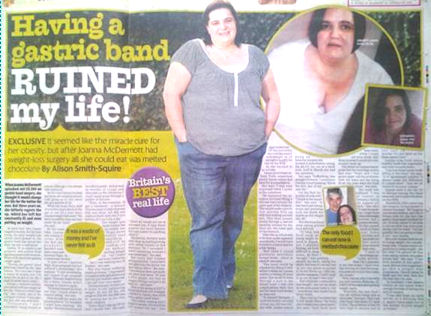 When Joanna McDermott splashed out £8,500 on gastric band surgery, she thought it would change her life for the better for ever. But three years on, she bitterly regrets the op, which has left her constantly ill and even putting on weight.

At more than 20st, Joanna longed to be slim. But far from being the easy weight-loss option she’d dreamt of, the gastric band has turned her daily life into a nightmare.

Joanna, 39, is unable to eat properly and suffers from agonising pains in her stomach. Worst of all, she is now gaining weight again.

‘Having the gastric band fitted has ruined my life,’ says Joanna. ‘Not only has it been a waste of money, but I’ve never felt so sick in my life. I wish I’d never had it done.’

Joanna, a customer adviser, has battled with her weight all her life. ‘Even as a child I was big,’ says Joanna, who is the youngest of three. ‘I took after my dad, who was well-built.

‘Fortunately, I don’t remember being teased at school, although I was always self-conscious.’

By the time Joanna reached her teens, she weighed around 13st, going up to 16st when she got married at 24.

When her mum, Mary, died of a sudden heart attack at the age of just 55 a year later, Joanna’s weight ballooned. ‘We were incredibly close and her death hit me hard,’ she says.

At the same time, Joanna was coming to terms with the fact she probably wouldn’t ever have a baby with husband Nigel, 46, a warehouse worker.

‘A year before I married Nigel, I’d got pregnant but had suffered a miscarriage,’ she explains. ‘It was devastating, but I hoped I’d get pregnant again.’ However, despite trying for a baby, Joanna didn’t manage to conceive again.

‘I’d always enjoyed my food, but then I found solace in comfort eating,’ she says.

Over the next few years, the pounds piled on. ‘For breakfast I didn’t have anything,’ she recalls. ‘But then lunch would be a McDonald’s. And as well as snacks of crisps and chocolate in the afternoon, I could easily graze through a packet of biscuits.

‘Then, in the evenings, I’d get a takeaway – a massive Chinese meal or plate of greasy fish and chips. All this was washed down with two 2-litre bottles of Coca Cola a day.’

The weight gain made Joanna feel incredibly low. ‘Nigel never really said anything – although he could eat and eat without putting weight on – but I hated my body. I hated the fact I was wearing size 28 dresses,’ she says.

She also began suffering health problems. ‘I was rushed to hospital with gall stones and had my gall bladder removed. I also got tired very easily.’

Unsurprisingly, doctors put it down to her ballooning weight. At just 5ft 5in, she weighed 20st 4Ib. Her BMI was 47, putting her in the very obese category.

‘Every time I saw my GP he said I should diet,’ she says, ‘I knew my weight put me at increased risk of high blood pressure and heart disease, but I just couldn’t do anything about it.’

Meanwhile, fertility tests didn’t show up anything wrong with either Joanna or her husband. ‘So I assumed I wasn’t conceiving because I was overweight,’ she says.

But every diet Joanna attempted failed. ‘I even tried diet pills from the doctor but they had no effect,’ she says. ‘Conventional diets just made me crave food more. ‘I’d lose a little weight, but feel so hungry, I’d binge and put it all back on – and more.’

Then in the spring of 2007 a friend who’d lost a lot of weight confided to Joanna that she’d had a gastric band fitted.

‘She looked amazing and I began to wonder if it would be the answer for me.’ She approached her GP, but incredibly she told she wasn’t overweight or ill enough to qualify for one on the NHS.

So she decided to go private.

Joanna, from Stoke-on-Trent, Staffs, researched gastric bands online and went for a consultation.

She says: ‘I was very impressed when I spoke to the consultant.

‘After the op, which was to be done under a general anaesthetic, I would have to stick to a liquid diet for a few weeks.

‘But then I could gradually introduce normal foods – albeit in smaller amounts.

‘The band could be adjusted by filling it with saline to make my tummy smaller or taking off some saline. This would be done through a port in my breast bone. I was told complications were rare and the band could always be removed.

‘It seemed fantastic. I could eat smaller amounts of food, but still feel full,’ she adds. Joanna was so keen to have the surgery she booked it immediately, taking the £8,500 fee out as a bank loan. And in March she had the operation.

She says: ‘Everything was straight-forward. I remember coming round thinking ‘this is the first day of my new life’.’

For the first six months all was well. ‘I stuck to the liquid diet,’ she says. ‘It was hard just eating soups and pureeing food, but worth the hassle as the weight fell off.’

But she soon found even eating pureed food difficult.

‘I’d been told food such as bread might be hard to digest, but I started finding all food difficult to keep down. At first I thought I was pushing myself too hard, eating too much. But even if I cut my food up into tiny pieces or pureed it, I’d still throw up. I felt constantly nauseous. I didn’t want to go out in case I was sick.’

And while she continued to lose weight – she lost six stone in one year, going down to 14st – sometimes, she couldn’t hold down fluids.

‘Since the op, I’ve never had a full week when I’ve been able to keep every meal down,’ she says. ‘And there have been times when I could not even drink anything because it would all come straight back up.’

The stress on Joanna was so great that her marriage ended last year. ‘Nigel and I had grown apart, but the problems with the band and me being ill all the time were the final straw,’ she says.

Her work also suffered. ‘I was so unwell in January, I had to be signed off sick,’ she says. ‘It was devastating. I might have been overweight before, but I always worked. To find myself stuck at home has been terrible and has made me feel more depressed than ever.

‘I used to be a happy-go-lucky person. Now I’m a prisoner in my own home. I don’t even like driving as I feel the stomach pains are so bad they make me unsafe.’

‘Ironically, the only food I can eat without being sick is chocolate,’ she says. ‘And I can only keep that down if I melt it first.

The problem is that it’s very high in calories and in the last 18 months I’ve put back on the three stone I lost.’

‘I can feel these harder foods sitting in the band,’ she says. ‘It is agonisingly painful. It doesn’t make any difference if I puree them – they set off waves of stomach cramps.’

Joanna went to see her GP to discuss having the band removed, but it cannot be done on the NHS.

Thankfully, after contacting her surgeon, he has agreed to remove the band. ‘My surgeon was always brilliant and I don’t blame him for the fact the gastric band hasn’t worked for me. Nobody seems to be able to tell me what may have gone wrong with the band – I’m just grateful that he’s going to take it out,’ says Joanna.

She now wishes she’d stuck to losing weight the conventional way. ‘I realise there’s no quick fix to losing weight – the fact that I’ve gained all this from eating melted chocolate proves that,’ she says. ‘I just wish instead of this gastric band, doctors had suggested I go into a proper diet programme. I would rather be fatter and feel well, than live the half-life I do now.

‘In hindsight, I also believe clinics do not press home enough the risks of having this sort of surgery.

‘I can only hope my story serves as a warning that a gastric band might not be the answer to your weight problems.’

Category: Recent Stories 2010, Sell my story to the Mirror, Stories sold to newspapersBy Alison Smith-SquireDecember 23, 2012
Tags: Weightloss
Share this post
Share with FacebookShare with TwitterShare with PinterestShare with LinkedInShare with WhatsApp