This is how Pat Janaway’s story about tracing her siblings appeared in the Daily Mirror newspaper. 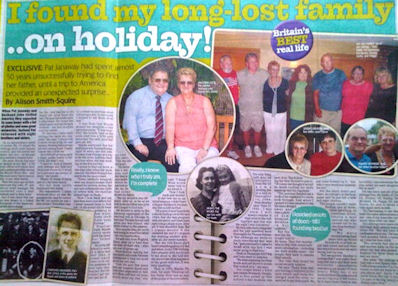 EXCLUSIVE: Pat Janaway had spent almost 50 years unsuccessfully trying to find her father, until a trip to America provided an unexpected surprise…

When Pat Janaway and husband John visited America they expected to come home with a lot of photos and some great memories. Instead Pat returned with eight brothers and sisters.

In an extraordinary series of events, Pat, 65, traced the siblings she’d never known existed, and discovered her father had died – all because of a randomly-chosen hotel.

Her mum, Maude, had rarely spoken of her dad – a US army officer with whom she’d had a passionate affair during the Second World War – and Pat could never find a trace of him, or any other family.

Then two years ago on their American trip John, 67, and retired retail manager Pat wandered into a war museum next to their hotel.

And it was there that her eye was drawn to a faded photograph of her American dad that was to change her life – and lead her to the family she never knew she had.

The next few weeks were a whirlwind. Pat found her father’s grave and met his eight children – her four brothers and four sisters.

‘To discover I have eight siblings has made me complete,’ she says, ‘I always felt a whole chunk of my life was missing. Meeting everyone has felt like coming home. Finally I know who I truly am.’

As a little girl growing up in a single parent family in the 1950s, life wasn’t easy.

‘I used to look at friends with siblings and dads and think how wonderful it would be to just have one brother or sister,’ she recalls.

‘Mostly I’d dream of being part of a big noisy family.’

She remembers: ‘I often wondered about my dad. My grandparents said he named me Pat, but mostly he was a taboo subject. Then when I was 11 a friend taunted me about not having a dad. So – nervously I decided to ask Mum about him.’

It was then that Maude showed her daughter a tiny navy blue purse. ‘It was beautiful,’ she recalls, ‘and on the press stud was a little gold aeroplane. She said, ‘your dad gave me this’.

Maude explained that her dad’s name was Thomas Byrnes. Aged 20 when she met him, he came from Chicago and was in the 8th Army Airforce. She’d met him when she was working in the fire service.

Curious to find out more, a few days later when her mum was out, Pat rifled through her wardrobe for more clues.

‘There, carefully wrapped, were my mum’s medals she’d earned for service during the war and underneath was a pile of letters with the familiar airmail sign on them.

‘Now I look back and am sure they were love letters but I never opened them to find out – if she found out I’d been peeking in her wardrobe she’d have been furious.’

Frustratingly, Maude never spoke with Pat about her father again.

At 16 Pat left school to work in a shop and met John, a joiner who’d come to fit out the premises. A year later they married. But Pat couldn’t get her lost dad out of her mind. She adds: ‘John was also intrigued.

‘His father was a seaman and had died at sea a month before he was born so like me, he had never known his father.

‘But my situation was different. After all, as far as we both knew my father was alive and I longed to find him.’

Pat decided to write to the American equivalent of the electoral roll in Chicago to trace any Thomas Byrnes and when one was found, she wrote a letter to the address.

Nine months later, he wrote back saying he wasn’t her – father – she was heartbroken.

Pat and John, from Wigford, Essex, went on to have four children of their own – who are now all grown up.

Nevertheless, having her own family only made Pat more determined to find out more about her own dad.

‘Over the next few years both my daughter Karen and John tried separately to talk with Mum and find out more details about my dad,’ she says. ‘I knew Mum would never talk to me about it.

‘Now I look back and wonder if she saw me as an inconvenience. I didn’t have a happy childhood, because she was a cold mother.

‘Of course it must have been a shock finding out in the mid 1940s that she was pregnant with me and it can’t have been easy being a single mum.

After all, it was shameful then. But I always wonder if she resented me and if I stopped her meeting another man – after all, she never married.

‘But she told Karen she’d burnt everything about my dad and when, on my 50th birthday, John pleaded with her to talk to me about it, she told him she would take what happened to the grave with her. It was very upsetting.’

Then in 1995, Maude, 76, died. Pat says: ‘Clearing out her things there was no sign of the purse or the love letters. The only thing left was an invitation from the US army – inviting her to a ball on September 16, 1944.

Nine months latee – June 14, 1945 – I was born. I will always wonder if they went to the ball together and that was the night I was conceived.’

By then John had a computer and the pair searched more thoroughly for Thomas Byrnes. ‘But although we wrote to many, none was my dad,’ says Pat, ‘and eventually I came to terms with the fact I was never going to find him.’

Then in December 2007 Pat and John went to America.

‘We were exploring the Deep South and just drove to hotels that looked nice,’ she says.

The couple found a hotel just outside Savannah, Georgia, and as they pulled up they noticed a war museum was next door. The following day they decided to pop in. ‘Of course we thought it would be worth looking my dad’s name up and his regiment.

‘The assistant handed me a book of his regiment for me to look through. And when I opened it I was amazed to see his name straight away and even a photo of him young and attractive in his uniform.’

But the next day the couple had to fly home. Then five months later, in May 2008, armed with more information – including her dad’s middle name – the couple flew back to resume their search.

This time they found his social security number.

Pat says: ‘Sadly from that, and visiting a cemetery in the area where he’d been discharged from the army, we were led to my dad’s grave. We put some flowers on it – that was a very emotional moment for me.’

But the story didn’t end there. An obituary in the local paper said he had left a wife and eight children.

The couple couldn’t resist finding one of them. ‘After knocking on countless doors, finally a man opened one who turned out to be one of my brothers,’ says Pat.

‘We were worried having their sister turn up would be a shock, so at first we just said John’s dad and their dad were friends and we were seeing how he was.

‘But we quickly decided to confess that I was really their long-lost sister and they were wonderful – immediately welcoming me as part of their family. When one of my brothers threw his arms around me in a big hug, it felt fantastic to have found them at last. Incredibly I discovered my dad also called his next daughter Pat as well!’

‘It’s fascinating to see they have the same mannerisms as me – one of my sons also very much takes after our dad.’

Her siblings have since also told their dad’s elderly widow about Pat. ‘But she says he confessed about me,’ Pat says, ‘and guessed when I turned up I was his love child.

‘She already had one son and another baby on the way when my dad was posted to England for three years and met my mum.’

She adds: ‘My siblings say Dad was a real family man so I will always wonder if in those letters he sent my mum he did ask about me? Sadly I will never know. But just to know I’m part of the big family is a dream come true.’

How to sell your story about lost family >

Category: Recent Stories 2010, Sell my story to the Mirror, Stories sold to newspapersBy Alison Smith-SquireDecember 21, 2012
Share this post
Share with FacebookShare with TwitterShare with PinterestShare with LinkedInShare with WhatsApp