This is how a story I wrote about house-swapping appeared in the Daily Mail.

(All the participants contacted me via searches and from my Featureworld Casting Directory.) 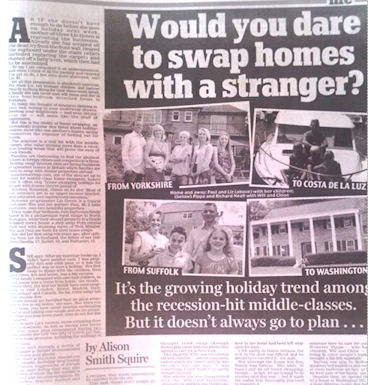 A luxury home in an exotic destination for free is the dream…but does the reality ever match up?

As if she doesn’t have enough to do before she goes on holiday next week, mother-of-three Liz Green is regrouting the bathroom.

Already she has scraped off the dead ivy from the front wall, cleared the cupboard under the stairs (which included replacing the carpet) and dusted off a baby’s cot, which then had to be assembled.

‘To say I am exhausted is an understatement, and when I think of all the packing and cleaning I’ve yet to do, I feel even more shattered,’ says Liz, 47.

Yet all this preparation is essential. For when Liz, her teenage children and partner Paul fly to Hong Kong for their three-week break, a family she has never met will come and live in their four-bedroom detached house in Yorkshire.

From Yorkshire… Liz, with partner Paul and her children Nathaniel, Isobel and Claudia, has been house-swapping successfully for years.

To Costa De La Luz… For the mother-of-three, it was a perfect way to give her children a holiday when she was cash-poor after her divorce.

To many, the thought of strangers sleeping in your bed, nosing in your underwear drawer, meeting your neighbours – and even driving your car – will seem like the stuff of nightmares.

But this is the reality of house swapping, an increasingly popular trend where holidaymakers move into one another’s homes, saving themselves the expense of forking out for hotels.

The practice is a real hit with the middle classes, who value nothing more than a recession-beating break that will prove the envy of their friends. Families are clamouring to find the plushest houses in foreign climes and competition is fierce.

‘Holiday swap’ internet sites are listing hundreds of upmarket homes in Britain which families are keen to swap with similar properties abroad.

Luxehomeswap.com, one of the sites set up to cater for middle-class home-swappers, boasts that it offers only ‘house-swapping holidays for people with homes they’re proud of’.

Another, Homelink, claims on its site: ‘Most of our members are in an upper income bracket, well-educated and experienced travellers.’

Systems programmer Liz Green is a typical customer. She and her partner Paul, 48, a sales executive, own two beautiful properties.

Their main four-bedroom, two-bathroom family home is in a picturesque rural village in North Yorkshire, while their second property is a Grade II-listed mews house a step away from central York and with stunning views of York Minster. She and Paul use both for their home swaps.

She did her first swap ten years ago, after splitting from her ex-husband, the father of her children Claudia, 17, Isobel, 15, and Nathaniel, 13.

She says: ‘After my marriage broke up, I didn’t have surplus cash. I was property rich and cash poor, so it was the perfect way to have a holiday.’

‘When you do a swap, you have spent months exchanging photos and talking over emails and on the phone. So while you may never meet, they do not feel like strangers’

Her first swap to Spain with the children, then aged three, five and seven, was a big success.

‘The family I swapped with also had children, so their house was a home from home,’ she recalls.

Since then, she and her family have used swapping to visit London, Rome, Madrid, Italy, Switzerland and Canada. So far, every swap has been trouble-free.

‘Some friends are horrified that we allow strangers to live in our home,’ she says.

‘But when you do a swap, you have spent months exchanging photos and talking over emails and on the phone. So while you may never meet, they do not feel like strangers.’

But despite Liz’s success, home swapping does have a downside. As well as leaving your house spotless, many sites recommend leaving two clean sheets per bed, two sets of towels per visitor and basic groceries, including the makings of a first meal.

If that isn’t enough, a bottle of champagne is further recommended ‘to welcome your guests’.

Then there is the home manual you must compile, including local tourist information, suggestions of friends they can meet during their stay, plus reminders of which day the rubbish is collected and recommendations for babysitters, dentists, doctors and restaurants.

Many swappers expect to drive your car, and you will need to tell your car and house insurance of your plans.

For those who fret about the carpet when their children’s friends turn up at the door, the idea will sound terrifying.

But Caroline Connolly, of Homelink – which charges £115 for 12 months’ membership, says swaps rarely go wrong: ‘We have a Home and Car Exchange Agreement form to avoid misunderstandings and clarify who pays for bills and other things such as insurance excesses in the case of accidents.’

From Suffolk… The Neall family live in an 18th century house in Suffolk, set in more than an acre of gardens with a games room and half-size tennis court.

To Washington… The Nealls with the U.S. family’s challenging Siberian husky. They admit that swapping homes has brought a fair few surprises

Caroline points out that your home is less likely to be burgled while occupied.

‘The tiny number of complaints we do receive are to do with “housekeeping standards”. And if we did have a genuine concern about a swapper, they would immediately be expelled from the site.’

Juliet, editor-in-chief of bespoke hotel website Mr and Mrs Smith, organised the swap herself after the flat’s owners, who work in the film industry, replied to her advert on online trading site Craigslist.

She says: ‘Usually we stay in a hotel, but we loved the idea that a home swap is, in effect, a life swap. We would be seeing and living in a part of Manhattan we simply could not experience while in a hotel.

‘Also, we wanted to go for four weeks and it would have been extremely expensive to stay in a hotel for so long.’

The first sign that they hadn’t thought their swap through thoroughly came with the kitten they agreed to care for in New York.

‘Our daughter, Kitty, was ten months old and crawling – and we constantly had to watch she wasn’t getting into the cat’s tray,’ she says. ‘It was something I just hadn’t properly thought through.’

‘We’ve stayed in some amazing houses, which would cost a fortune to rent. And it means we always have someone here to care for our cats’

She admits she was disappointed with the ‘well-used bathroom’, ‘although the problem was I kept comparing it to a top hotel …’

Then, halfway through the holiday, Juliet was reduced to tears after returning from a day out to find the living-room floor being ripped up by the landlord.

‘The floor was being retiled. The owners had mentioned this might happen, but I’d never imagined it would be so bad,’ she says.

‘The apartment smelled of glue, Kitty was crawling on the sticky floor and all the furniture was stacked in another room.’

Ironically, the family ended up decamping to a hotel for two days.

The final upset came when Juliet returned home to find that the back door to her home had been left wide open for days.

‘I felt partly to blame because the lock on the door was difficult and we should have mended it,’ she says.

‘But although the house was fine, Simon was furious.’ She adds: ‘It hasn’t put us off home-swapping, though – in fact, we are hoping to do another later this year – but it made me realise how thoroughly you need to research it.’

Pippa Neall, a 41-year-old housewife who is married to Richard, 45, a company chief executive, does not contemplate such horror stories when she puts their 18th-century home up for a swap.

The family’s stunning house, near Woodbridge, Suffolk, is set in more than an acre of secluded gardens and boasts a games room and half-size tennis court. Unsurprisingly, Pippa has been receiving an inquiry about swapping every three days.

‘Richard is Australian, and this is a great way of visiting his relatives in Sydney,’ Pippa says. It is easier for us to have his family over for meals when we are in a house rather than a hotel.

‘We’ve stayed in some amazing houses, which would cost a fortune to rent. And it means we always have someone here to care for our cats.’

However, Pippa – who has two children, Will and Chloe – admits living in other people’s homes has brought a fair few surprises.

‘During one trip to Sydney, the gardener befriended us and turned up at every barbecue we had, as though he were part of the family,’ she says.

‘Another time, we opened the door to a house in Washington DC, to find a huge Siberian husky dog bounding towards us. We had been told about a dog, but had no idea he would be so huge and prove to be such a handful.

‘Later that night, as we settled into bed, we heard him howling outside the door. In the end, the only solution was to let him into the bedroom with us. We then discovered that he always slept on the bed.’

All attempts to entice the husky downstairs to sleep failed, and so for the four weeks she and Richard stayed in the house, he slept with them.

‘But then, for us, that’s part of the attraction of house swapping,’ she says. ‘You are living someone else’s life. You sleep in their bed, play their CDs and meet their neighbours. It’s a different life from yours, and you never quite know what to expect.’