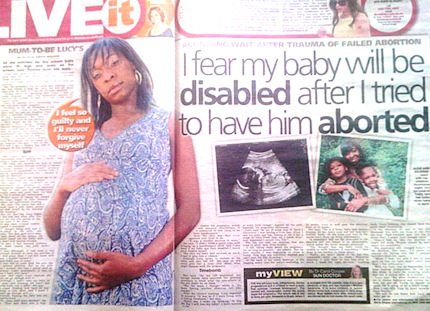 As she watched her tiny unborn baby wave its legs and arms on the screen, Lucy Thomas burst into tears.

Like any mum-to-be, Lucy felt overwhelmed with love for her child – but also a terrible sense of guilt.

For just weeks earlier, Lucy had tried to have an abortion.

But the procedure did not work and although Lucy has now vowed to keep her child, she will not know until after the birth if it has left the baby disabled.

Talking about her agonising wait, Lucy – now 28 weeks pregnant – says: ‘I’m desperately worried the abortion has harmed my baby. If it has, I will never forgive myself.’

Lucy, 30, decided on a termination when she was seven weeks pregnant.

Recalling the day she discovered it had failed, Lucy – mum to son Reamorus, eight, and six-year-old daughter Taija from a previous relationship – said: ‘I was devastated. But then it seemed a miracle he had survived.

‘He’d fought for his life, so I couldn’t face going through another termination. Now I can’t wait to hold him in my arms. I feel so guilty for having the termination and I’m desperately worried it has harmed my baby.’

Lucy, a trainee social worker from Birmingham, had not meant to get pregnant. She said: ‘I was on the Pill but I got a tummy bug and it stopped the Pill working.

‘My baby’s dad and I both knew our relationship wasn’t working and I couldn’t face being a single mum of three.

‘My other two children are both at school and I was halfway through studying to become a social worker. I just wasn’t prepared financially or emotionally for another baby. It was an agonising decision but I decided to have an abortion.’

In January, Lucy’s GP referred her to an NHS clinic where she saw a doctor.

She says: ‘I was surprised no one questioned my decision to have a termination. Instead, the doctor explained I had to take one pill (mifepristone) straight away and come back the next day for a second pill (misoprostol).’

Within hours of taking the second pill, Lucy began to have stomach cramps and experienced bleeding.

She said: ‘The doctor had said I would have a very heavy period and that would be the abortion pills working.’

But the next day Lucy began to feel sick and when after five days she was still feeling ill, she went back to the clinic. It was there stunned medics dropped a bombshell.

‘I thought being sick was a side-effect to the pills,’ she recalls, ‘but they gave me a scan.

‘And there on the screen, the doctors could see the baby, with his heart still beating strongly.

‘In fact, I had morning sickness. For some reason, the pills hadn’t worked.

‘I was distraught. It had been a very emotional decision to have the abortion in the first place. Now I just felt numb with shock. I couldn’t believe it.’

And worse was to come.

‘I was told to come back the next day for another abortion. But, as the pills hadn’t worked, this time I would need an operation under anaesthetic. I was so upset I burst into tears.’

Later that night, Lucy realised she could not go through with it.

‘Although I hadn’t seen my baby on the scan, just knowing his heart was beating made him a baby,’ she says.

‘I began thinking how hard he was fighting to stay alive. And I knew I couldn’t go through with it.’

However, keeping the baby was not straightforward.

‘The clinic staff were shocked,’ she says. ‘They said there was a high chance the pregnancy would still miscarry. Horrifyingly, if it continued he was likely to be born handicapped.’

Over the next few days Lucy agonised over what to do.

‘It was a terrible decision to make,’ she says. ‘I didn’t think I could cope with bringing up a handicapped child. And I also knew if my baby was born disabled I would never forgive myself.

‘But then my baby had survived so much. I had to give him a chance.’

Although Lucy spoke to doctors at the clinic and also her GP, she says no one could give her a clear idea about what might happen with the pregnancy.

She says: ‘As my GP explained, not enough babies have survived the abortion procedure to know what the side-effects of the pill might be on them.

‘But the more I thought about it, the more having another abortion felt like murder.’

After the clinic’s warning, Lucy expected to miscarry. ‘It was as if I were living with a ticking timebomb,’ she says.

‘Every day I woke up thinking, ‘Is this the day I will lose my baby?’ I have worried at every little twinge.’ Against all the odds, however, the pregnancy continued.

Lucy said: ‘At my 20-week scan in April I discovered I was having a little boy. When I saw his arms and legs waving at me, I felt a surge of love. From then on, I knew whatever happened I would love him.’

She has not told her children that she tried to abort their little brother.

‘I left telling them about the pregnancy for as long as possible,’ she admits, ‘but by four months I was beginning to show a bump. Now they are incredibly excited and can’t wait for him to arrive.’

At the back of her mind, however, is the nagging worry over her baby’s wellbeing. At 28 weeks, Lucy is well past the abortion limit of 24 weeks.

She says: ‘He is a lively baby and always kicking. So far, every scan and test says he’s healthy. Sadly, all the scans and tests in the world can’t show up every abnormality.

‘A consultant told me the chemicals in the abortion pill are linked to an abnormality which leaves the facial muscles paralysed.

‘The thought that my baby could be unable to smile because of something I have done is too terrible to think about.

‘Sadly, we won’t know if he has this syndrome until he is born. Whatever happens, I only have to feel him kick to know I made the right decision.’ Looking back, Lucy believes she should have been given more counselling.

‘I am shocked no one at the clinic discussed this with me more at the time,’ she says. ‘Had someone said, ‘Are you sure about this?’ I might have thought more.

‘Also I had no idea the abortion pills might not work. Women should be warned about this possibility.’

The experience also changed Lucy’s views on abortion. She says: ‘I’d never judge anyone for having one, but I personally wouldn’t have one again.

‘When I took the pills I felt it was so early on that the baby wasn’t really formed. Now I feel differently.’

With her baby due in September, Lucy is busy making preparations for his arrival. She plans to carry on studying while her new son is looked after in a creche.

Lucy says: ‘My older children are helping me to choose Babygros and clothes for him. And we are all trying to decide on his name. He is going to be a much-loved baby. Now I can only hope by some miracle he is born healthy.’

We will let you know how Lucy and her baby get on.