Do you have a health story to sell? >

This is how Kay Robinson’s story about how she manages with Parkinson’s disease appeared in the Sunday People newspaper. 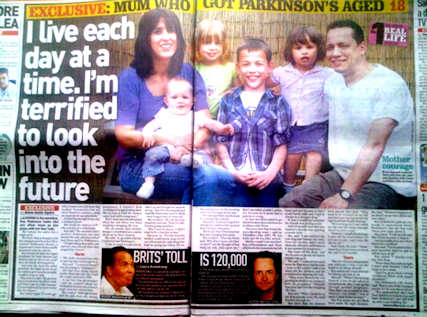 Laughing in the sunshine, Kay Robinson looks like any other mum as she plays with her four kids. But behind the smiles lies a tragic story.

For brave Kay is thought to be the youngest person in the UK to contract Parkinsons disease, a degenerative brain illness usually associated with the elderly.

Kay was just 18 when she began treatment for hand tremors and doctors had no idea if she could have the family she longed for.

And now she faces the awful possibility she might not live to see her children grow up as the incurable condition worsens daily.

Kay, now 35, said: My greatest fear is I soon wont be able to walk and I live a day at a time because I’m too frightened to look too far into the future.

Her battle began 17 years ago with a tremor in her left hand. Kay recalled: I worked in a bar and when I handed a customer a drink my hand shook uncontrollably.

At first Kay thought it was only a strained muscle.

But finally she went to a GP who sent her to a neurologist.

Kay said: The specialist didn’t mention Parkinsons but tests showed the only pills that worked were those used for Parkinsons.I began taking three pills a day and was very relieved when they stopped the tremor.

The shake returned from time to time but Kay tried to ignore it.

Kay said: I reassured myself I was too young for Parkinsons.

She had been dating factory worker Mark since she was 17 and the couple married in 1999.

A year later Kay got pregnant and she stopped taking her medication because she feared it might harm her unborn baby.

She recalled: Although doctors said the pills were safe during pregnancy, I couldn’t help worrying so I stopped taking them. But as soon as I did the {tremors came back with a vengeance. Kay’s fears proved unfounded when her son Owen was born weighing a strapping 8lb 15oz. But six months later doctors dropped a bombshell at a routine check-up for Kays tremors.

She said: A specialist told me I definitely had Parkinsons. I was so numb I could barely take it in and thought he must be wrong. Kay fled the hospital and tearfully blurted the news to Mark then begged him to leave her.

She recalled: He put his arms round me and said, Don’t be silly, I’m not going anywhere. But I was in pieces. I didn’t want to be a burden to him.

She went on: For the next two weeks I could barely drag myself out of bed and the only thing that kept me going was Owen. Id see his smiling face in the morning and I had to carry on for him.

But she and Mark decided not to increase their family.

Kay said: I always longed for at least two children but worried how Id cope with more.

Yet by the time Owen was four Kay was changing her mind.

She recalled: One day Owen said, Why don’t I have a brother or sister? and the thought of him being an only child upset me. Kay’s specialist couldn’t advise her because he’d never had a patient so young.

So Kay and Mark opted to go ahead because there had been no problems with Owen.

Kay, of Birmingham, said: Soon afterwards the tremors in my left hand and side became so bad I could barely walk and I had to change to a stronger drug. It was a terrifying reminder the disease was getting worse.

And 18 months later Kay was stunned to find she was expecting a fourth child.

She said: I was terrified the new drug had harmed the baby. Even the doctors didn’t know what side-effects it could have as it was untested in pregnancy.

Kay came off the drug but she became so poorly she had to resume taking it.

She said: I realised how much worse the Parkinsons had {become I was so i’ll I couldn’t walk or do much for the children and we considered terminating the baby.

Then scans showed she was growing healthily so we continued with the pregnancy. Danielle was born last October weighing 7lb 10oz.

Kay said: When I took her in my arms and she cried, the relief flooded through me.

But since then the tremors have spread. Kay said: They used to be confined to my left side but in the last few weeks my right hand has begun shaking.

Its terrifying but I cant think too far into the future {because then I wouldn’t cope. Instead, I simply live in hope a cure will be found before its too late for me and I take life day by day.

And Mark, 40, said: Some-times Kay’s hand shakes so much she cant feed Danielle.

But shes fiercely independent and although I help a lot she wants to do things herself. Kay admits shes had criticism for having any kids at all.

She said: When I was carrying Danielle a few people asked in astonishment why I was going through another pregnancy. They didn’t say as much but they inferred I was selfish. I was so upset I came home in tears.

But Kay insists she and Mark have made the right decision. She said: Whatever happens to me they’ll always have Mark and each other.

Kay reckons her girls are too young to understand about Parkinsons but she has told Owen, now eight, about it.

She joked: I call my left arm Mrs Tickle because it shakes.

And incredibly Kay isn’t bitter about the condition.

She said: I’m blessed to have such beautiful children and to still be here at all.

Kay added: I cherish every day with them. Even when they wake at night I don’t mind because I feel so lucky to be a mum.

And Ive given them a loving childhood filled with happy memories.

The Parkinsons UK charity said: Kay is one of the youngest people we’ve ever heard about.Its inspirational shes had four children as it shows you can have Parkinsons and still lead an active and fulfilling life.