Want to sell your story about celibacy? >

This is how Shirley Yanez’s story about giving up sex appeared in the Daily Mirror.

I gave up sex… and you should too! 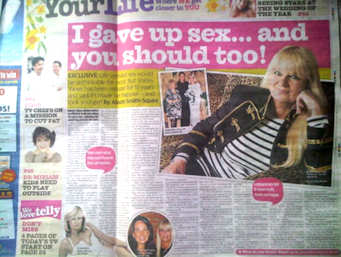 Life without sex would be unthinkable for most. But Shirley Yanez has been celibate for 10 years and says it’s made her happier – and look younger!

Shirley Yanez always makes an effort to look sexy when she goes out, enjoying the admiring glances she often gets from men.

But if the man chatting her up tries to get her into bed, he’s disappointed every time because Shirley went celibate 10 years ago – and says she will never change her mind.

‘I am not a man-hater. But I believe not having sex is the way to true happiness and success,’ says twice-married Shirley, 53. ‘So many women become obsessed with finding a man, always looking for love and worrying about whether they are good in bed.

‘But, like me, many would find their lives much less pressurised if they gave up sex.’

And instead of it putting men off, she says they are more interested. ‘Whenever I go out, I always attract men. After all, I dress in a way that makes me feel good and that look is sexy,’ she says.

‘But as soon as a man starts chatting me up, I’m always straight and say immediately if they are looking for sex, it definitely won’t be happening with me.

‘You might think they would disappear. Yet, it seems to have the reverse effect and makes them keener. I suppose it’s in a man’s nature to want what they can’t have.

‘There is one man in particular who has tried to get me into bed for the last 10 years. I am sure he thinks eventually he will convince me to break my vow of celibacy – and he regularly suggests sex. And even though I tell him he’s wasting his time with me, he won’t give up. I find it flattering but I never think of changing my mind.’

Shirley admits she does still get sexual urges but keeps them at bay by walking five miles a day and doing yoga. But is it really worth it?

Shirley certainly thinks so. ‘Giving up sex is so empowering and liberating. I even believe being celibate can make women more successful because you can channel your energies into work rather than fretting about a relationship. It enables women to focus on themselves for once and enjoy life in other ways.

Not having sex even keeps you looking younger. And it’s been so wonderfully life-changing for me, I can’t see myself ever having sex again.’

While it might not be an obvious conversation-starter, it never stops Shirley telling people.

‘I always tell people I’m celibate, even strangers at a party. They always react in the same way – horror. Then they say they could never do it.’

But sex once played a large part in Shirley’s life. ‘In my twenties I had lots of boyfriends. In fact, while I’ve never counted up how many men I’ve slept with, it must be around 50,’ she recalls.

But at 32, she started to worry about getting married and having babies.

‘Until my 32nd birthday, I’d been having a great time,’ she says. ‘But in hindsight, like many women I was pressured into thinking and behaving as I believed women should.’

When she met Scott on a blind date a few months later, he proposed within a week.

And Shirley wasted no time in getting married. ‘It was 1988 and we had a lavish wedding in London, followed by a boat party on the Thames,’ she says.

But it was only a year before their marriage was in trouble.

‘Scott particularly wanted a family,’ she says. ‘But after months of trying for a baby, nothing happened.’

They went for tests. ‘It was then I discovered at some point in the past I’d been infected with the sexually transmitted disease, chlamydia,’ she says.

‘It was devastating because it had caused pelvic inflammatory disease and damaged my fallopian tubes leaving me infertile.’

The couple’s only chance of a baby was IVF. But although she and Scott embarked on one cycle of it, Shirley found the treatment difficult. ‘I realised I didn’t want a child enough to warrant going through all the hassle that IVF entailed,’ she recalls.

‘But Scott so desperately wanted a child. The fact I wasn’t so keen on having a baby caused a huge rift in our marriage and a year later we split.’

It was then Shirley first decided to cut back on sex.

‘Too much sex too early had caused all my infertility problems,’ she says. ‘And then having sex at the right time to have a baby had put all sorts of stress on me. I decided to try and have a clean break.’

Shirley concentrated on work and her business rapidly became a huge success.

‘Rather than worrying about who I might meet, I concentrated on my career and myself. My confidence soared. I bought a beautiful four-bedroomed detached house, travelled the world and dressed in designer clothes,’ she says.

But then at a friend’s wedding, she met Marty who, at 40, was the same age as her. ‘He was the groom’s brother, a Mexican who lived in Los Angeles. I just fell for him straightaway.’

Incredibly, Marty proposed at the wedding and the next day the couple flew to Las Vegas where they married.

Shirley says: ‘Looking back it’s as if I let sex steer me off course again. It’s almost as if I had an addiction to having sex. I’d managed to stop being addicted and at least get it under control, and then fallen off the wagon again.’

Shirley was so smitten with her new husband she sold up in the UK and moved to the US. But after running into money troubles, they broke up.

‘Then at the age of 43, I decided never to let my heart rule my head again,’ she says,

‘Losing everything forced me to look at my life. I realised sex had never fulfilled my needs or even made me feel close to someone. In fact, while I enjoyed it, it never made me happy.

‘I decided the best way to avoid any more disasters was to make a decision not to have sex.

‘It was actually a defining moment. But I knew I would have to start rebuilding my life. And taking a vow of celibacy was the start of it.’

For the next few years Shirley tried to make a go of living in America but in 2005 she returned to Britain. ‘It was a terrible time as I was homeless and virtually penniless,’ she says. And after struggling to find a job, Shirley set up her own business. ‘I became so good at surviving on a shoestring, I began giving advice on the internet on how to look good and spend less,’ she says.

With her business partner and sister-in-law Holly, 44, opened a swap shop near her home in Countesthorpe, Leicester, where women can exchange clothes.

And now she travels the world on cruises and holiday camps giving women advice on The Hollywood Look For Less.

‘When I suggest women give up sex and tell them I haven’t had sex for 10 years, they are often shocked,’ she says.

‘But my recipe for looking good is for women to take control of their lives. Often I meet women who are depressed. They hate their bodies and have lost all their confidence.

‘Sadly, many are in relationships where sex has become a chore and just another stress to be fitted into their busy lives. But getting out of a bad relationship and becoming celibate is the first step to regaining that confidence. My whole life is dedicated to helping other women recognise how destructive sex can be.The pressure society puts on us all to have sex is huge. People often comment that I look younger for my age and it’s true at the age of 53 I have the body I have always longed for. Most of all, being celibate gave me back my passion for life.’

Category: Recent Stories 2010, Sell my story to the Mirror, Stories sold to newspapersBy Alison Smith-SquireDecember 24, 2012
Tags: Relationship stories
Share this post
Share with FacebookShare with TwitterShare with PinterestShare with LinkedInShare with WhatsApp