Do you want to sell coma story? >

This is how Colleen Wright’s coma story appeared in the Sunday People newspaper. 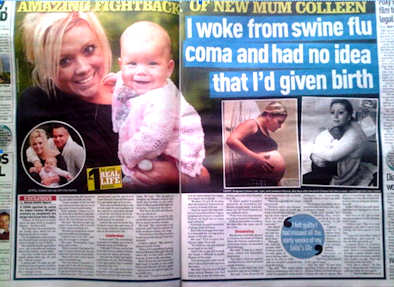 A COMA sparked by swine flu wiped Colleen Wright’s memory so completely she forgot she’d just had a baby.

Colleen, 24, had been overjoyed when she gave birth to daughter Hunnie – her first child. But days later she was felled by the deadly virus, which left her fighting for life in a coma. For six nightmare weeks partner Jay Harriott kept a bedside vigil as doctors fought to save Colleen. But when she finally opened her eyes, she remembered nothing about her ordeal – or her baby. And her world was turned upside down when Jay, 25, told her: ‘You’re a mum.’

Colleen said: ‘I woke up still thinking I was pregnant, so when I first set eyes on Hunnie she was like a stranger to me.

‘And by the time the memory of her birth came back, she’d grown so big she didn’t look like my baby. ‘I was a stranger to her too and she cried every time Jay put her in my arms. It was heartbreaking’

Sales assistant Colleen was hit by swine flu in October, a day after she came home from the hospital where 7lb 13oz Hunnie was born.

She said: ‘Jay had a cough and when I went down with it as well I didn’t think anything of it.

‘But then my temperature soared and I had difficulty breathing.’

Colleen went to her GP – who sent her straight to hospital.

She said: ‘Fortunately, I got there just in time.

‘Tests revealed I had swine flu and I’ve since found out doctors believed I was hours from death.

‘But at the time I didn’t know what was happening.

‘The last thing I remember is being told I was off to intensive care and I just had time to tell Jay to get me well for Hunnie before I closed my eyes.’ Her condition deteriorated and she was moved from Oxford’s Churchill Hospital to a specialist unit in Leicester.

There she was hooked up to one of only eight hi-tech machines in the country in a last-ditch attempt to flush the virus from her body.

Doctors gave Colleen only a 50/50 chance of survival.

And for the next six weeks Jay, Colleen’s mum Sue and some of her closest relatives stayed at her side as she battled for life.

Colleen said: ‘The next thing I remember is waking up to lots of birthday cards and balloons.

‘I thought I’d been out for just a few days but incredibly I’d been in a coma for almost six weeks.

‘Jay and my family had held a celebration for my 24th birthday a few days earlier but I couldn’t remember any of it.’

It wasn’t the only thing she’d forgotten – and computer worker Jay had to tell her she was now a mum. He said: ‘The thought of bringing up Hunnie without her mum was terrible so the relief when Colleen pulled through was amazing – I was over the moon.

‘But when she first saw Hunnie she was shocked.’

Colleen was so dazed by the coma she even thought Jay had left her to marry another woman.

He said: ‘She asked where my ring was and I had to explain we have necklace-chains, not rings.

‘It took her a few days to come round properly and get back her memory.’

‘Once I’d remembered giving birth to Hunnie I thought Jay had taken her to live with another woman. It was really upsetting.’

But Colleen was determined to fight back to health so she could bond with Hunnie all over again – and recover enough strength just to cuddle her.

She said: ‘I used to watch Jay and my mum change her nappy and long to do it myself.

‘Because I’d got ill so soon after she was born, I’d barely had a chance to bond with her.

‘And she wasn’t the tiny newborn I remembered but a bigger gurgling baby I barely recognised because my head was so fuzzy and confused.’

But Colleen struggled to come to terms with the missing such a chunk of the tot’s life.

She said: ‘I felt so upset that Hunnie didn’t know me.

‘If I held her she just wanted to go back to her dad.’

And Colleen was still so weak she found it difficult to cradle Hunnie in her arms.

The turning point came a week after Colleen had woken up from the coma.

She said: ‘Jay was at work and mum tucked Hunnie into bed next to me. I saw her little eyes closing and a rush of love flooded over me.

‘It didn’t matter I couldn’t physically do everything for Hunnie straight away – I was her mum and the bond between us was suddenly there.

‘From then on I concentrated on getting better for Hunnie.’

Colleen was unable to walk in the days after she came out of the coma.

But she was eventually allowed to return to her home in Oxford when she bravely underwent a week-long course of intensive physiotherapy.

She said: ‘I was in a wheelchair, which was incredibly frustrating.

‘Jay had to carry me upstairs and then I had to slide back down on my bottom.’

Three weeks later her hair started to fall out in clumps.

She said: ‘I was always proud of my long blonde hair so it was devastating.

‘Then my nails fell out – even my toenails.

‘Doctors said it was because I’d been so close to death my body concentrated on keeping my main organs alive and shut down my hair and nails.’

She added: ‘Fortunately my hair has begun to grow back.’

Through the difficult months while Colleen learnt to walk again, it was a driving ambition to be able to look after her daughter properly that kept her going.

She said: ‘This might sound hard to understand but I felt so guilty I’d missed the early weeks of Hunnie’s life – even though logically I know it wasn’t my fault I fell ill.

‘Yet despite everything, she is a wonderfully laid-back baby who is always so happy.

‘And just seeing her smiling face every morning kept me striving to do more.’

Colleen went on: ‘I had to force my body to move, so sometimes it was painful getting Hunnie dressed or bathing her.

‘But I was determined to be a good mum.’

And Jay said: ‘It was hard watching Colleen do things for Hunnie without my help because I knew she was in agony. But after everything that had ­happened it was also wonderful to see Colleen caring for Hunnie herself.’

Today Colleen can walk again and has even managed to return to work.And best of all, she is now strong enough to cradle Hunnie in her arms.

Colleen said: ‘She is a real mummy’s girl and I never stop telling her how much I love her.

‘I just feel incredibly lucky I am still here – alive and well – to see my little girl grow up.’

Lorraine Sherr, of London’s University College Hospital, said: ‘This is a wonderful story because it shows despite going through such a trauma, a mother who makes enough effort can still bond with her baby.’

Prof Sherr added: ‘In this case, Colleen literally fell in love with her baby all over again.’