This is how Grace Sharrock’s real life story about postnatal depression was told in the Daily Mirror newspaper.

I didn’t believe my little girl was mine 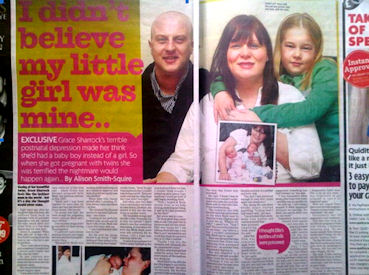 EXCLUSIVE: Grace Sharrock’s terrible postnatal depression made her think she’d had a baby boy instead of a girl. So when she got pregnant with twins she was terrified the nightmare would happen again…

Gazing at her beautiful twins, Grace Sharrock feels like the luckiest mum in the world – but it’s a day she thought would never come.

Eight years ago, after her daughter Ellie was born, she suffered from such an extreme form of postnatal depression that she claimed the baby which she’d only given birth to a few days earlier was not even hers.

Grace, 31, explains: ‘When Ellie was just 10 days old, I was found running down the road in just a top and a pair of knickers.

‘Then I was taken kicking and screaming to hospital and I denied point-blank that Ellie was my baby.’

So her concern was understandable last year when she discovered she was pregnant again.

She was petrified the same would happen again.

‘I was absolutely terrified throughout this pregnancy that after the birth I would suffer again,’ she says.

‘But while having twins is exhausting, I just feel calm and content. Thankfully I feel amazingly well.’

Luckily this pregnancy was very different to her first one – when Grace had become – pregnant with Mark, her previous partner, in May 2000.

‘Mark and I had been together for more than six years and had just moved to a new house,’ she recalls.

‘So money was tight. But even though the pregnancy wasn’t planned Mark and I were thrilled.’

Unfortunately things didn’t go smoothly for them during the pregnancy.

‘I suffered such severe morning sickness I lost weight and was admitted to hospital,’ recalls Grace.

‘Meanwhile Mark was working really hard in his job as a chemical inspector and both of us felt we hardly saw one another.’

When baby Ellie finally arrived after a gruelling 20-hour labour, Grace was elated – at first.

‘She weighed 7lb 10oz and had the bluest eyes I had ever seen,’ says Grace.

‘Looking at her perfectly formed nose, mouth and jet black tufts of hair, Mark and I burst into tears with joy.

‘I was overwhelmed with love for her.’

But the next day things started to go wrong. ‘I kept looking at other mums in the ward and seeing them happy,’ recalls Grace. ‘Even though I was physically fine I couldn’t help feeling tearful. Everyone said it was just the baby blues but I just didn’t feel right.’

And when after two days Grace went back to her home in Little Sutton, Cheshire, she started to feel like she was living in another world.

‘My house felt strange and not like home. Normally I’m so tidy but instead I didn’t seem to care that everything was a mess. At lunchtime the next day Mark made some soup and suddenly, for no reason, I felt a huge rage bubbling inside me.

‘It came from nowhere but I felt so angry I picked up the soup bowl and threw it at him. I couldn’t think straight. I picked up more plates, cups, anything I could get hold of and began smashing them.

‘Then I lunged at Mark, raining blows on his body, kicking, scratching and biting. It was as if I was possessed by the devil.’

But worse was to come.

‘As Mark stood there white with shock, I ran past Ellie in her pram and into the street. Ellie was crying but I ran sobbing down the road. It was March and I was barefoot and could feel sharp stones but it was as if I was a zombie.

‘Finally I ran into the chemists and collapsed into the pharmacist’s arms.’

By then, several people had called the police, but Grace didn’t realise all the mayhem was about her.

‘Mark tried to run after me but Ellie began to cry and he couldn’t leave her,’ she says. ‘Eventually, my brother arrived to take me back home. Mark looked so upset.’

It was decided that after a meal and a good night’s sleep that Grace would be fine.

‘But when I poured some tomato sauce on my chips at teatime I suddenly couldn’t eat them. They looked as if they were covered in blood.’ The next day Grace was sectioned.

She says: ‘I knew I was in hospital but I couldn’t understand why. Later the next day Mark came to visit with Ellie. It was heartbreaking.

‘She looked so cute with her little pink hat and bootees on. But when Mark went to hand her to me, I had no urge to pick her up. ‘Where’s my baby?’ I asked him. ‘Then I said ‘This is a lovely baby but it’s not mine – my baby is a boy.’ I couldn’t understand why Mark was so upset.’

Tests over the next few days confirmed that Grace was suffering from puerperal psychosis – an extreme form of postnatal depression.

She was admitted to a psychiatric unit and wouldn’t return home for six months.

‘Perhaps it was all the medication but the days went by in a blur,’ says Grace.

‘I later discovered I was violent to the staff, often lashing out. I didn’t eat and spent much of my time sleeping. But as my condition improved I started to miss Ellie desperately.

‘By then I realised she was mine. I would pick her up and then cry bitterly when it was time for her to leave.’

Within eight weeks a room became available at a mother and baby unit.

‘The fact I had recovered enough to look after Grace again was wonderful.’

But, during the next three weeks Grace started panicking. ‘Looking back I still wasn’t well,’ she says.

‘I would smell Ellie’s ready-made baby bottles and convince myself they were poisoned, emptying them down the sink.’

After this Ellie was removed again. It was to be another month before Grace could care for her again.

‘Mark brought Ellie in to visit me. I used to marvel how big she was and how much her hair had grown.’

A month later Grace went home for a visit. ‘This time the house felt like home,’ she says, ‘Holding Ellie felt natural. I didn’t feel agitated as I had done before.’

By July, although still attending outpatients for treatment, she was home for good, but her relationship with Mark suffered.

‘Although he had been marvellously supportive, something had died between us,’ she says.

‘I was devastated when weeks after I had come home – and Ellie was six months old – we split up. I will always wonder if what happened destroyed my marriage. But Mark just said he didn’t love me any more.’

Fortunately, Grace’s mum Doreen lived nearby and was able to help but it wasn’t until Ellie was eight months old that she finally felt like a good mum.

‘For a long time I felt incredibly guilty that I had missed out on that special bonding between a mum and her baby and it was hard to get that back. Sometimes I would still pick Ellie out of her cot and feel that I was just looking after her, that I wasn’t her mummy.’

But things slowly started to improve. When Ellie was 18 months, Grace got a new job as an office clerk and then, four years ago years ago, she met Glyn, 31, a painter and decorator.

Grace says: ‘Glyn really wanted a baby – but while I desperately didn’t want Ellie to be an only child, I was frightened to get pregnant in case it all happened again.’

Then last August Grace discovered she was pregnant. ‘Instead of being happy, I was frightened,’ she says.

And this time from six months into pregnancy Grace took lithium, a hormone balancing drug. ‘No one knows exactly how lithium works but it evens out the moods,’ explains Grace.

The big test came when in May, three weeks early, Grace gave birth by – caesarean to Thomas, 6lb 2oz and his sister Maggie, 6lb 9oz.

She says: ‘I was waiting for the baby blues to strike but they never came. Instead, amazingly, I just felt thrilled to have them.

‘I can only hope my story gives hope to other women who’ve suffered like I did that you can come through it. And that miraculously another pregnancy can be entirely different.’

Category: Recent Stories 2010, Sell my story to the Mirror, Stories sold to newspapersBy Alison Smith-SquireDecember 24, 2012
Tags: Pregnancy stories
Share this post
Share with FacebookShare with TwitterShare with PinterestShare with LinkedInShare with WhatsApp