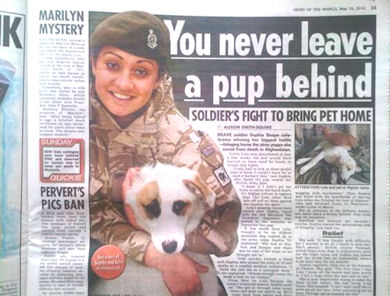 This is how Sophia Snape’s pet story appeared in the News of the World newspaper.

Little Lola was abandoned at just a few weeks old and would have starved – or been used by locals in brutal dog fights.

‘I only had to look at those soulful eyes to know I couldn’t leave her to such a barbaric fate,’ said Sophia, who found the pup outside her British Army base.

‘I knew if I didn’t get her home to safety she faced death. It’s Afghan culture to capture dogs like Lola, shear their ears off and set them against one another for sport.’

Lola’s amazing rescue story started after Sophia, based with the 2nd Battalion The Yorkshire Regiment, was posted to the warzone in September last year.

A few weeks later Lola, thought to be an Afghan mountain dog, turned up at the army camp. Sophia, 23, explained: ‘She was so tiny, thin and hungry and there was no sign of her mum, so we brought her in.’

Lola quickly formed a bond with Sophia, who joined the army at 18 and works as a combat medical technician. ‘I think she saw me as a surrogate mum,’ she explained. ‘Almost straight away she made a bed on my clothes.’

From then on Lola became the camp’s treasured mascot. Sophia went on: ‘She got us through some tough times and kept our spirits up. We’d come back from patrol and there was Lola, waiting for us – her tail wagging with excitement.’ Then Sophia was faced with the heartbreak of leaving Lola when she finished her tour of Afghanistan and returned home to Newcastle- under-Lyme in March.

But as everyone in the military knows, you never leave a buddy behind. And Lola was no exception.

Terrified her beloved pet wouldn’t survive, Sophia started the painstaking task of bringing Lola back too.

She said: ‘It was fraught with difficulty but I wanted to do all I could to save her. She’s special.’ British charity Nowzad, which helps stray dogs in Afghanistan, paid for the flight home and Sophia has raised half the £4,000 fees for quarantine, where Lola must stay for six months.

Sophia regularly visits her at the kennels in Chester. She said: ‘The first time I saw Lola I knew all the hassle had been worth it. I felt a huge relief she was safe at last.’

She is now desperately trying to raise the final £2,000* before she can bring Lola home. She beamed: ‘I can’t wait until she is with me all the time. After everything we’ve been through we’ve bonded for life.’

* Through publicity gained through selling her story to the press via Featureworld, Sophia gained over twice the amount she needed.