This is how Charlotte Duly’s unexpected baby birth story appeared in the Sunday Mirror newspaper. 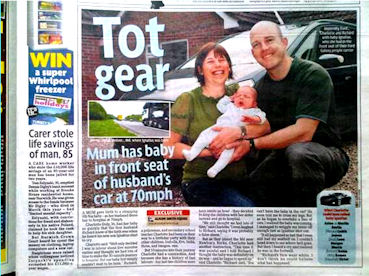 A mum gave birth to a strapping 9lb 9oz baby – as her husband drove her to hospital at 70mph.

Charlotte Duly, 36, had her baby so quickly that the first husband Richard knew of the birth was when he heard his new son Ignatius start to cry.

Charlotte said: ‘We’d only decided I was in labour about five minutes earlier and thought we had lots of time to make the 30-minute journey to hospital. But our baby boy simply couldn’t wait to be born.’ Richard, a policeman, and secondary school teacher Charlotte had been on their way to a birthday party with their other children, Isabella, five, India, three, and Imogen, one.

But 10 minutes into their journey Charlotte had a contraction. And because she has a history of fast labours – her last two children were born inside an hour – they decided to drop the children with her sister instead and go to hospital.

‘We still thought we had lots of time,’ said Charlotte. ‘I even laughed to Richard, saying it was probably a false alarm.’

But as they joined the M4 near Newbury, Berks, Charlotte had another contraction. ‘This time it was painful and I told Richard I thought the baby was definitely on its way – and he began to speed up,’ said Charlotte. ‘Richard said, ‘You can’t have the baby in the car!’ He even told me to cross my legs. But as he began to overtake a line of cars, I realised the baby was coming. I managed to wriggle my jeans off enough just as Ignatius shot out.

‘It all happened so fast that I even still had my seatbelt on. I couldn’t bend down to see where he’d gone. But then I heard a cry and realised he was in the footwell.

‘Richard’s face went white. I don’t think he could believe what had happened.’

What Charlotte could have called baby Ignatius

Category: Recent Stories 2010, Sell my story to the Mirror, Stories sold to newspapersBy Alison Smith-SquireDecember 24, 2012
Tags: Pregnancy stories
Share this post
Share with FacebookShare with TwitterShare with PinterestShare with LinkedInShare with WhatsApp