Do you have a story to sell about being a single mum or dad?

This is how Vincent Ashton’s story about being a single dad appeared in the Daily Mirror. 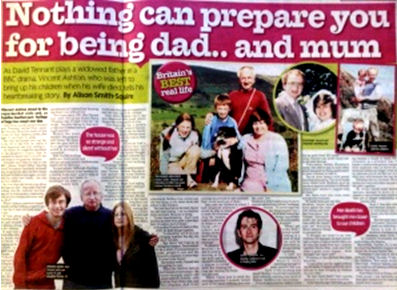 As David Tennant plays a widowed father in a BBC drama, Vincent Ashton, who was left to bring up his children when his wife died, tells his heartbreaking story..

Vincent Ashton stood in the supermarket aisle and, as families bustled past, feelings of huge loss swept over him.

Only three months earlier Vincent’s wife, Christine, had died from cancer. She was just 38 and her death left him to care for their children, Emma, then aged 13, and Scott, 11, alone.

But with the funeral over and dayto-day life to deal with, the reality of what happened was truly sinking in. As Vincent, 44, bought the ingredients for his daughter’s cookery class, he realised he would have to be both dad and mum to his grieving children.

Vincent’s story mirrors that of new BBC1 drama, Single Father. Starring David Tennant as a suddenly widowed dad, it follows life after his wife’s death and how he falls in love again, not only with his wife’s best friend… but also his four children.

But how does any parent cope when their spouse dies – especially a dad left looking after the children? And how easy is it to contemplate a relationship with another woman after your wife has died? “While I always considered myself a hands-on dad, nothing prepared me for having to take over both roles,” he says.

“At first, when Christine died, I was just focused on staying strong for the children. “It was only a few months after her death the enormity of bringing up the children by myself really hit home. “Small things such as doing the shopping would make me feel alone. Out of the blue, sheer grief would hit me sideways as I realised how daunting the future was without her.”#

The couple met in 1981 after Vincent had come out of the Royal Navy. “Christine was 17 and I was 22,” he recalls, “and after dating for four-anda-half years it seemed natural to get married.”

Within two years Christine was pregnant with Emma. Two years later she gave birth to Scott and the family settled in Accrington, Lancashire. With Vincent working shifts as a hotel porter and later as a security guard, childcare was mostly left to Christine. Vincent admits: “Although Christine worked part-time as a care assistant in a nursing home and I used to help at home as much as I could, in hindsight we were a family with traditional roles. I was the breadwinner and she took care of the children.” Then, when Christine was 31, she was diagnosed with breast cancer.

Emma was seven and Scott, five. “The diagnosis was a terrible shock,” admits Vincent. “There was no family history of breast cancer and she was so very young.” Christine had a mastectomy and hemotherapy and the family thought she had recovered. But, four years later, she began to find walking increasingly difficult.

“It was the worst possible scenario,” says Vincent, “because the cancer had spread to her bones. Doctors explained they couldn’t cure it – we knew it was terminal. “I’ll never forget Scott asking, ‘Will mum be all right?’, and I just whispered she would be.

“I found it too hard to take in that Christine wouldn’t be here. She was such a driving force in the family. Even from her bed she was reading the c h i l d r e n stories and asking to see their schoolwork. Neither of us could accept she was dying, so she never wrote last letters to the children.

“But just days before she died, I knew the end was coming. I sat the children down and said, ‘Mummy is dying.’ “It was heartbreaking – Scott cried and Emma went very quiet. A few days later Christine died at home.”

At first, after Christine’s death in May 2002, he held things together. “I remember all of us just clinging together the day she died,” he says. “But then I felt I had to be strong for everyone. There seemed to be a whirl of arrangements to make, people to see and the funeral to organise. In some ways I’d never been busier.”

But within weeks, Vincent was struggling to cope. “When the children were in bed I would sit downstairs – the house strangely empty and silent without Christine – with just my dogs Gizmo and Lucy for company. And those evenings would seem so dark and black that I could barely see a future. “Also, with the children at school, I had imagined somehow I would be able to return to work. But it became clear the children really needed me at home to see them after school and doing shifts would mean I was out in the evenings.”

He knew he wouldn’t be able to carry on working as he had done and he decided to study for a degree in social work. But studying fulltime and running the home was not easy. “While I knew how to work the washing machine, I probably turned most of the white washing grey over the next few weeks as it didn’t really occur to me to separate whites from colours,” confesses Vincent. “I’ll never forget the day Emma handed me a list of what looked like foreign ingredients to do some baking at school.

“When I got to the shop I found myself looking at a shelf of what can only be described as strange baking chemicals.

“I felt so overwhelmed. It wasn’t only searching through so many packets that was hard, it was knowing how much Christine would have enjoyed it. And suddenly realising how much of Emma’s childhood she was missing.”

Friends and relatives rallied round but as most lived 300 miles away, Vincent was pretty much left to his own devices.

“Fortunately Debbie, Christine’s sister, was able to pop in more often and it was great for Emma particularly to have a woman to talk to.

“But at times being a sole parent has been exhausting. The worst times were when both children were in sports or musical activities in different places and I needed to support both of them.”

But there have also been some unexpected bonuses. “If I hadn’t been put into this situation, I never would have spent the time with Emma and Scott that I have done,” says Vincent. “Christine’s death put spending time with the family and not worrying about material things in perspective. “It brought me closer to my own children. For example, we have always had a couple of days a month when we all clean the house from top to bottom together. Emma often cooks and Scott does a great roast dinner – what teenager can claim that?”

Focusing on the children has come at a price. “I was never one for nightclubbing but it’s harder to have a social life when you are so busy bringing up children on your own.” He says there hasn’t been anyone seriously in his life since Christine.

“A few months ago I did meet up with one woman a couple of times. But ultimately as a widowed man it is harder to meet a new partner compared with someone who is divorced. A divorced person no longer loves their ex, whereas you do not fall out of love with your wife because she has died.

“Christine was my soulmate. We were young and innocent when we met and we grew together. “So while I know some widowed spouses manage to move on and remarry, I am not sure that I could have that sort of deeper relationship with anyone else. “And it has also always just seemed simpler not to introduce any new ‘mum’ into the children’s lives.”

But the dark days that followed Christine’s death are definitely over. Emma is now 22 and works as a business support assistant, while Scott, 19, is at Cumbria University doing a performing arts degree.

Meanwhile, Vincent, 52, is working as a learning disability support worker, which fits around family life. “Nowadays I can look at old photos without crying,” he says. “I can say to the children, ‘Your mum would have liked that’, without feeling sad and I can recall an old memory with laughter rather than tears. “And when I look at Emma and Scott, I feel proud. I can definitely say that they have turned out the way Christine would have wanted.”

Category: Recent Stories 2010, Sell my story to the Mirror, Stories sold to newspapersBy Alison Smith-SquireDecember 23, 2012
Share this post
Share with FacebookShare with TwitterShare with PinterestShare with LinkedInShare with WhatsApp